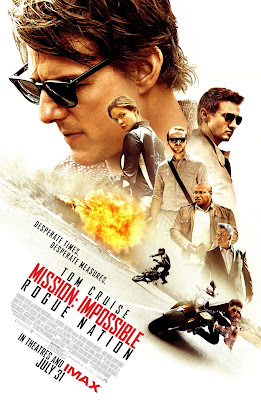 Tom Cruise is awesome. There's just no other way to put it. He's a movie star the way that Cary Grant was a movie star: pure class, pure suave, supercool, attractive. And like old Cary, he's not incredibly versatile. With a few exceptions, if Tom Cruise is in your movie, he'll be playing Tom Cruise, it doesn't matter what his character's name is. But he is always 100% committed to the role and gives it everything he's got. He also, and this point can't be overstated, looks hella cool when he runs, which is good because he runs a lot. Like, in almost every movie he does, he'll end up booking it at some point. It's super hard to run and look cool, believe me. Most people look ridiculous when they're clipping along at full speed. Not my boy Tom.
In Mission Impossible: Rogue Nation, Tom runs, but he also flies, speeds, fights, shoots, suffocates and dies. And given the fact that he is renowned for doing all his own stunts, he probably actually did die on set.

MI:5 is a continuation of the last film, but only insofar as it is the next impossible mission the impossible mission's gang must face. Really, you could walk into MI:5 without having seen any of the previous films and be just fine. Like the TV show 24, each mission movie more or less stands as its own little novella, rather than as a chapter of a complete novel.

This time around CIA grumpy pants Alec Baldwin goes before the Senate to have IMF shut down, complaining that the covert operatives are irresponsible and unneeded. The problem is, Tom Cruise's Ethan Hunt has just discovered a rogue faction of the British Intelligence that effectively do what IMF does, but for evil rather than good. In order to keep on their trail and stop them before world domination can take place, Hunt goes rogue himself, with the CIA hot on his heels. Over the top action set pieces ensue.

MI:5 is a hell of a lot of fun. There's a lot of talky talk, more so than I remember there being in the previous couple films, and as such the movie could have easily been ten minutes shorter and worked a little tighter. But the talking is sandwiched between sequences of such impressive action bravado that by the time you start to feel a little restless, you're hit with a 'wow' moment and forget all about it.
Unfortunately that 'wow' factor is diluted a bit by the fact that all those cool set pieces have already been ruined in the trailer. Don't get me wrong, Tommy boy hanging from a cargo plane 5,000 feet above the solid ground is awe inspiring. As is his helmet-less high speed chase on a winding mountain on racing bikes. As is his high speed car chase through a busy city in some far off land. But all that insanity was in the trailer. I understand that the marketing department over at Paramount Pictures want to cause the mouths of millions of action fans to water, but far too often these days I check out a movie that looks awesome from its trailer, only to find that all the good bits were in that trailer (I'm looking at you Minions).

Something the makers of these Impossible movies have going for them is that there is nothing they can come up with that is too far. When your whole franchise rests on the idea of each film being more impossible than the last, that pretty much gives you free range to throw that entire kitchen sink right on in there.
In Rogue Nation, things certainly become pretty impossible for IMF. Of course, we know they will prevail, if for no other reason than that Tom Cruise had already signed on for a sixth instalment by the time this one hit the screens. But I can't say I felt the same sense of danger that I had with Ghost Protocol or MI:3. The problem is that there isn't as much substance in between the boomshuckaluck. Those talking scenes I mentioned are quite procedural and the love interest angle feels tacked on. As a result, this isn't a film that you will find yourself thinking about by the time your popcorn induced stomach ache has worn off.

But, those are subjective quibbles and at the end of the day, if you're looking for a couple hours of high energy and high excitement, Mission Impossible: Rogue Nation is your ticket.