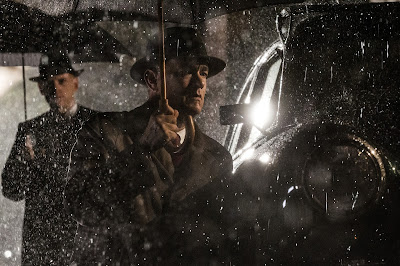 Spy thrillers. You're either going to dig them, or you aren't. They can be stuffy, they're usually long, often set in the 50's and often revel in themselves speaking above the viewer's head. I had to watch Tinker Tailor Soldier Spy three times before I felt I had a grasp at what exactly was going on in that beast. Trying your damnedest just to keep up with the plot can suck some of the enjoyment out of watching the thing in the first place. Bridge of Spies doesn't speak in as many riddles as TTSS, but it is a spy flick set, when else, at the height of the cold war.

Tom Hanks plays Tom Hanks essentially, it doesn't matter what his character's name is, and this time around he is an upstanding insurance lawyer. You know, the type that would do whatever it takes to ensure a high moral parameter is set. And as unrealistic as his character can seem, he does happen to be based on a real person. In Tom Hanks' capable hands though, he just becomes Tom Hanks.
In this movie Tom Hanks is tasked with providing a reliable defence to a man suspected of being a Russian spy, on trial for his life. Hanks does a good job, too good for some, and when one of America's own spies is caught and held, Hanks is appointed to facilitate the exchange of bodies. 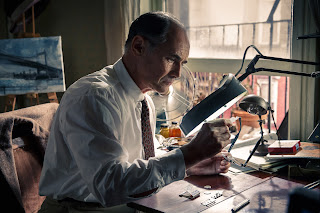 That's about it. There isn't a great deal of suspense in the movie until the actual exchange is to take place and at over two hours, it takes its sweet time getting anywhere in the plot. But despite occasionally dragging and suffering an overabundance of dry talky talk, the film kept my interest well enough. Of course, there aren't two more reliable men making movies these days than Tom Hanks and Steven Spielberg. With Hanks in front and Spiel behind the camera, at the very least you know you will be getting something that's well made and well acted. And it is that. It looks very pretty, thank in no small part to the lighting capabilities of frequent Spielberg collaborator Janusz Kaminski. And while Hanks' performance is reliably good, it's also, on the downside, overly reliable. There isn't much adventure in it. You don't sense that things could go sideways at any moment or doubt a proper outcome because Hanks is at the helm and even when he isn't playing it safe, he's still Hanks and that's safe enough. Actually, the standout performance in this film for me was Mark Rylance (who?) playing the Soviet spy. I found myself wanting to see more of him and less of Hanks as the movie wore on.

So, Bridge of Spies is a spy flick. It's very well made, very well acted. It's based on a true story, one I don't know much about so I can't comment on how close to the page Spielberg stuck, but he can't have run too wild with it as the story itself is really rather simple, predictably so at times. I don't doubt it will win a bevy of awards season nominations when the ballots are cast, but outside of Rylance and Kaminski, I don't think it deserves to win any of them.