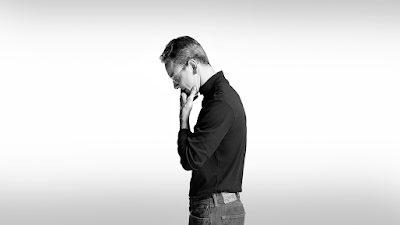 I make it my business as a consumer of entertainment not to dig into the personal lives of artists. I don't read gossip blogs, I don't watch entertainment news shows, which tend to focus more on celebrity shenanigans than anything else and I don't Wikipedia people so I can see a record of their arrests and lawsuits. I don't do these things because: a) a person's personal life, even a person in the public eye, is none of my business; and b) I just don't care. I don't care if someone's a jerk in real life. I don't care if they refuse to sign autographs, or they drink too much, or they cheat on their spouses. I don't know these people, in all likelihood I never will and if I only watch movies or listen to music made by people without flaws, well, I'll have a lot more free time on my hands than I do now.
And so it is with Steve Jobs. I appreciate the man, I appreciate what he's done for the world, his vision, his products. But I don't want to know about his life. I don't care if he was a slave driver to his staff, or if he was a bad father, or if he thought himself Jesus Christ, as many of his admirers did/do.
So I went into Steve Jobs, the new biopic by director Danny Boyle and screenwriter Aaron Sorkin, not knowing what to expect. Will it be reverential, or will it be a smear?
As it turns out, it was both.

The movie takes place backstage at the unveilings of three of Jobs' personal computing breakthroughs (or what were meant to be breakthroughs), the original Macintosh computer, which bombed, Job' 'perfect cube' the NeXT, which bombed, and the 1998 release of the original iMac, which put Apple on its current course for world domination.
As the clock to showtime counts down and the auditorium fills with hopeful computer nerds at each event, we follow Jobs around backstage as he tries to circumvent technical glitches, issues with his family and issues with his coworkers.
There is also the odd flashback to important times in Jobs' ascension, like his being fired from Apple and he and Steve Wozniak arguing over whether their original Apple computer should have two ports or six. 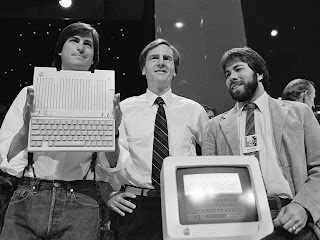 It's a strange narrative structure. In one way it feels brave, eschewing the typical three acts, confrontations and resolutions most movie's pace themselves around. In another way, it feels unfinished. This movie is two hours long, but I felt by the end like it had just started. That's due I suppose as much to the fact that it represents such a small chunk of such a long and impressive career, as to the filmmaking team and its talent in crafting compelling entertainment.
I think Aaron Sorkin is the best screenwriter in Hollywood. Whether in TV or film, his scripts are the smartest, sharpest, most well crafted of anyone putting pen to paper (whether that paper be organic or electronic). And director Danny Boyle is one of the most exciting in his field as well. I've loved his movies since Trainspotting, much of the rest of the world has loved his movies since Slumdog Millionaire. His films are always interesting, well made and unique. He doesn't repeat himself and he doesn't seem to worry about box office potential. But as well as Boyle does, Steve Jobs is really the Sorkin show at the end of the day, in much the same way that The Social Network was. In fact, this movie feels a hell of a lot like The Social Network in a number of ways, not least of all in the music by Daniel Pemberton, which at times sounds as if it's copying note for note the iconic Reznor/Ross Network score.
But Boyle still knocks it out of the park, and with Sorkin and Boyle as this movie's mommy and daddy, Steve Jobs was sure to be a beautiful baby. And it is. As far as the craft of making movies is concerned, this is one of the best films of the year.
Credit due also to Michael Fassbender, who plays Jobs with a great deal of care and intensity, as well as Seth Rogan, who tackles a rare dramatic performance very comfortably, and Kate Winslet, Katherine Waterston, Michael Stuhlbarg and Jeff Daniels. A hell of a cast who do a hell of a job. If there was an Oscar for best ensemble, this would be a contender.

As I said, I don't know much about Steve Jobs. So I don't know how many liberties Sorkin took with the fact vs. fiction of this particular tale. From what I've heard, he took many liberties in favour of more dramatic pacing and snappy dialogue. If that is the case, then so be it. I didn't go to this movie to see a proper page to screen adaptation of Jobs' biography, I went to see a good movie. I saw a good movie, a really good movie. A movie that feels unfinished, like someone taking a hundred polaroids on a vacation and pulling out just three random photos from the pile and showing them to you. It would've been nice to see a few more photos to gain a better understanding of the vacation as a whole, but those three photos, my God, they are beautiful, aren't they?