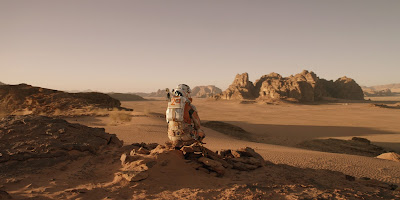 Let's get one thing out of the way right off the bat. True science has pissed in Ridley Scott's face. The Martian is about an astronaut who is left behind on Mars by a team that thinks him dead. He isn't. And now he is alone on an alien planet with dwindling food and oxygen resources. Where science screws the movie over is in NASA's recent announcement that there is evidence of water on the red planet. In The Martian, which mostly takes place there but was, I would assume, not filmed on location, there is no water or evidence of it, just rock and sand. Obviously when Ridley made the movie, we didn't know Mars had water, and by the time we found that out, the movie was in the can and ready to roll, leaving no time for a last minute addition to the plot. In fact, a major plot point in the film is the eponymous astronaut's efforts to grow food on a planet that has no water.
So there you go, you've been warned. Don't go into this movie scoffing at the filmmaker's lack of scientific knowledge as some people have been doing. Cut them some slack.

There seems to be a sub-genre gathering steam these last couple years. First we had vampires, then everything was zombies, now it seems Hollywood is preparing to beat to a pulp the person vs. space movie. You could even go so far as to say the sum of The Martian's parts is Gravity with a side of Interstellar. And while it doesn't achieve the visual elegance or pure spectacle of Gravity, or have the intelligence and scope of vision of Interstellar, it does feel like a worthy bedfellow.

The Martian is based on a book, a book I didn't read. I don't read the book before the movie, I've explained this before, but the long and the short of it is I'd rather experience a story in a movie than on a page. Call me illiterate or unrefined, I can take it. I'm assuming much of the technical mumbo came from the book, rather than the (still very witty and smart) head of screenwriter Drew Goddard. In that case, my hat goes off to Andy Weir, who wrote it. The story has a lot of complicated (well, I found it complicated) scientific problems it needs to solve to keep Mark alive and get him home. I was impressed with its wit in this regard. I don't know how much of it is scientifically accurate in the real world, truthfully, I don't care. It worked for the film, so it worked for me.

Matt Damon is very well cast as the poor fellow left alone on planet Mars. He carries much of the movie on his shoulders and if he wasn't up to the performance task, the movie would've failed. But this is Damon, he's proved himself capable of almost anything an audience could ask of him numerous times and he slides comfortably into the role of martian botanist Mark Watney.
Back on earth, NASA is using its biggest brains to get Mark home. A parade of characters march through the film, each tasked with overcoming impossible obstacles and circumventing morale pummelling drawbacks. These characters are well acted, but some feel underwritten and provide the film with little more than a bridge to get from one arc or narrative beat to another (ahem, CNSA).

I've been thinking about this movie a lot since I saw it. It's entertaining, it's gorgeously filmed (mostly on green screen I'm sure, but still), it's well acted and it has a lot of nice things to say about our planet's ability to unite under a given cause. And while the plot is very much the three act structure, with all the climaxes and obstacles in all the proper places, and it has more supporting characters than it can keep track of, it's still a good story and a fun adventure. I give it a hearty four stars and wait patiently for the next human vs. space movie to come rolling down the red carpet. Maybe Matt Damon can head back up there, this time with Ben Affleck for Good Will Hunting 2: How Do You Like Them Space Apples? It writes itself!