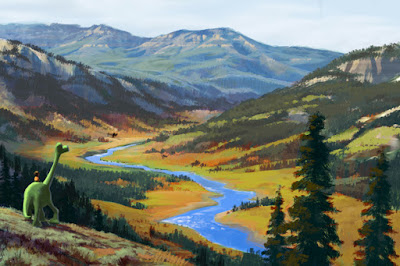 In his indispensable book on the craft of telling screen stories, Robert McKee says "flawed and false storytelling is forced to substitute spectacle for substance, trickery for truth" (Story, 1997). What he was talking about, twenty-eight years before it came out, was The Good Dinosaur.
The Good Dinosaur is a movie that is never less than truly beautiful to behold. The locations are gorgeous and are photo realistic in their animation. And as our protagonist, Arlo, and his scruffy little Neanderthal companion Spot journey through middle America trying to find their way home, the challenges that await them provide the film with countless chances to shine, literally and figuratively.

The film takes place a few million years after the would-be extinction of the dinosaurs, if the asteroid that science has guessed killed them off just sailed right past the planet rather than colliding with it. As such the dino's and creatures we encounter in the film have continued to evolve and many looks like crosses between two species, which is, actually, scientifically accurate. The film does a good job of this and even as we're presented with a number of very strange sequences (one minute Arlo and Spot are tripping balls on rotten fruit, the next they are in a western cattle herding(?)), you can tell the creative team put a lot of thought into the details.

But The Good Dinosaur is truly a case of style over substance. It's a story that will feel immediately familiar, and that's because it's been told before, over and over again.
The most apparent cinematic progenitor of Arlo's adventure is The Land Before Time, in which a group of dino's must make their way through an inhospitable land to 'The Great Valley', a paradise with plentiful clean water and lush, green treetops as far as the eye can see.
There are also sequences stolen, and I do mean directly lifted, from The Lion King. I won't detail them because they protect important plot points, but rest assured, if Disney didn't own both properties, there would be some litigation afoot.

So it's not an original story. Ok. But is it worth dropping money that might be better spent on Christmas presents or Black Friday deals? That depends, as Disney/Pixar's second movie of 2015 (which is rare when you consider that neither movie is a sequel), it's undoubtably the lesser of the two. Where Inside Out was a unique, dazzling, truly moving experience, The Good Dinosaur feels more like a movie made by some other studio. A studio aspiring to Pixar, but without the talent to meet the bar.
And this movie has had a rocky road to the screens. It was started and stopped, pushed back and shelved and reworked and pushed back again. Although it only has one screenwriter credited to it, it has half a dozen 'story by' credits. All things which point to Pixar probably knowing they had a lesser-than product on their hands, but also feeling pressured to have something out during the holidays.

And yes, these are the gripings of a thirty-something, not an eight year old. I took both of my boys, ages seven and five, and neither of them complained about the similarities to the aforementioned movies, both of which they've seen enough times to have noticed. In fact, they paid the movie the ultimate compliment my boys can pay a film they've just watched, they came home and played the movie. There is no higher praise in my household than that. So don't let my style over substance caterwauling bring you down, I only mention it as grievance because Pixar films have, with few exceptions, come to be known as true family films, enjoyable to those of all ages, again and again. This is more like a movie for kids to enjoy while their parents argue about politics on Facebook on their phones inside their coats with the brightness turned down. 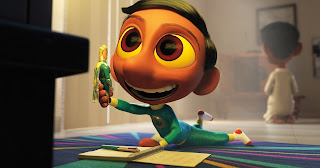 PS - I need to mention the Pixar short that plays before The Good Dinosaur. Sanjay's Super Team is a five minute flick about a cute little boy named Sanjay who is far more concerned with playing with his superhero toy and watching his favourite show on television than in praying alongside his father. When his father enforces a prayer time upon Sanjay, Sanjay, bored with the meditative ritual, escapes inside his imagination where, with the help of his super team of Hindu deities, takes on a demon of sorts in an eye popping burst of colour and dazzlement.
Not only is it wonderful to see Pixar finally adding some cultural diversity to their films and characters, but Sanjay is flat out one of the best, if not the best, short films the studio has produced. It's important in my household that my kids are exposed to many different climates: political, religious and cultural. And because we can't afford to take them to different, far off countries every year, to take them to a movie and have them exposed to people with other backgrounds and beliefs, while still enjoying a story full of imagination and excitement, is wonderful.

Whereas The Good Dinosaur felt like a short that was stretched into a feature, Sanjay's Super Team feels like a feature waiting to happen. I hope we see more of this diversity from Disney/Pixar in the future.