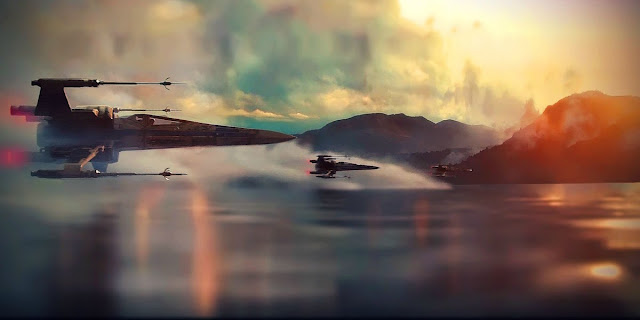 We all have a duality in us. A moral compass with a needle that wavers between good and evil, right and wrong. It's been in us all along and is part of what makes us what we are. No one is completely good and no one is completely bad, though for many of us our needles spend far more time on one side than the other. This compass, along with our longing to know where we came from and why we're here, has led our species to create policing, governments and religion in an attempt to protect us from ourselves, to govern us and to explain our purpose, to give us a purpose.
George Lucas tapped into this very basic slice of our human makeup when he created Star Wars in 1977. Star Wars is essentially a bible story in space. Good vs. evil, light vs. darkness, miracles and magic and murder and sacrifice. With the consequences of this galactic soap opera affecting an entire universe. It was an incredibly simple story on an incredibly large scale. And like a good bible story, it connected with people in a massive and fundamental way and went on to create a phenomenon that has permeated the lives and cultures of nearly every corner of the globe. If that's not religion, I don't know what is.

So you could consider the announcement of Episode VII in the Star cannon akin to an announcement from the Catholic church that they will be releasing a new book of the bible during the Christmas 2015 season.

Now I'm personally not a very religious person. I like the Star Wars films, I grew up, along with most of the modern world, on the films and their subsequent pop cultural dominance. But they don't represent any particular touchstones in my life and I doubt I would even consider them hallmarks in cinematic history, as far as my list is concerned. I also hated Episode's I, II and the first half of III. But I can get caught up in hype as easily as the next person and my curiosity at the initial announcement of Episode VII two years ago eventually transformed into higher and higher levels of excitement as the release date drew nearer.

So now I've seen it. And what do I think? Well, the short of it is, although I haven't compiled my best of list for 2015 yet, I don't think it will be on it. That doesn't mean it's a bad film or that I didn't like it. It's about as good a film as you would hope it to be. I just think I had, or will have had, ten better movie related experiences by the end of the year.
Overall there are lots of things I loved about this movie and really only a couple of things I hated.

The thing I loved most about it was its aesthetic. This looks and feels like a Star Wars film. Like an original trilogy Star Wars film. Where the prequels screwed up by making themselves look too advanced and too slick, thereby confusing the timeline and making for an awkward marathon, The Force Awakens strikes the perfect balance between a film that looks and feels like a film made in the late 70's/early 80's, while taking full advantage of modern movie magic techniques.
Another thing I loved was the tone. This movie isn't afraid to get very dark. And a lot of people die in it, on screen and off. I'm impressed with Disney on this front as the studio is known for shying away from abject noir in an effort to appeal to the widest possible audience.
The cast (and casting) is also very good. It's nice to see familiar faces and even nicer to see new ones. Oscar Isaac can do no wrong as far as I'm concerned, but he's really great in this. As are relative newcomers Daisy Ridley and John Boyega (both television actors previously). The Star universe is also peppered with a lot of great new alien and robotic characters, both cuddly and horrific.
In fact it is one of these characters that I didn't like about the film.
In Episode VII the new evil regime is called the First Order and it's run by a large, wrinkly bastard called The Supreme Commander. Now aside from being the most fake, CGI looking thing in a film filled with otherwise photo realistic special effects, we're given absolutely no backstory on this Supreme Commander whatsoever. Where did he come from? What's his relation to the dark side and why is he in charge of it now?
There is also a lot of plot side stepped involving Han Solo and Princess Leia. Given the amount of time that has passed between Return of the Jedi and The Force Awakens, not much is said about the interim.

But those issues may be resolved in Episode VIII, which is already in preproduction, or Episode IX, which is sure to follow.

All in all The Force Awakens is a great movie and will prove to be a real treat for fans of the series. And the bigger a fan you are, the more you will get out of it, I'm sure.
...I wanted to avoid being superfluous, but to hell with it. I can't think of a better way to end this review, so here you go:

Verdict: The Force is strong with this one.