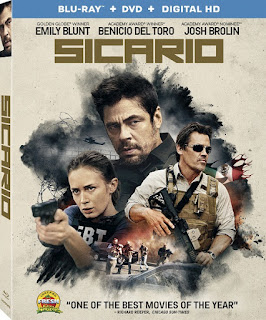 Movie: For me Sicario was the most unsettling film of the year. I found this much more disturbing and difficult than The Revenant, or even the documentary The Look of Silence.
Although technically a fictional story, the film is laced with a gritty, docudrama aesthetic, albeit a beautifully photographed one, and is anchored in real world concerns that plague the various citizens and law enforcement agencies represented.
I greatly admire this film. It's a work of art by a very talented group of artisans, it is well told and very intense. That being said, it's not a film I'll return to very often precisely because of how well it does its job. But I can certainly see why it has cracked so many critics year end top ten lists.

Presentation: Sicario was shot by famed cinematographer Roger Deakins. As such it is an immensely beautiful film. Even in the midst of violence the movie achieves the look of a desert painting. So it makes sense that the blu-rays picture presentation is one of perfection. This is one the best looking blu-rays I've seen in a long time. Watching this film on a 60" 1080p Samsung, I was never less than thoroughly impressed with the image.
There is a lot of literal darkness in the film, and Deakins and director Denis Villeneuve play with the light within that darkness the way an artist might do while composing a watercolour, cutting through it in shafts and ribbons and the picture never falters. Even in scenes where we see specks of dust floating in shafts of sunlight, the dust specks have pop and definition. Overall a very impressive reproduction of the image.

The sound is also very impressive. The action scenes slam out of the speakers at you with a lot of force without overwhelming the rest of the soundtrack. And the quieter scenes are clear and easily understood. A true test of doing sound right on a blu-ray is whether you can keep the film at the same volume throughout, without having to keep turning it down during the loud scenes and up during the quiet ones. This one passed that test with flying colours. There is also a nice mix between the sound effects and composer Johann Johannsson's haunting score. A good score is one that compliments the action on screen, not directs it. This is a very good score and a fine compliment to the narrative.

Extras: Not a lot in the way of extras unfortunately.

'Stepping Into Darkness' is a fifteen-ish minute discussion with Denis and Deakins about how they achieved the films look and the processes they took with each sequence. Theres also talk about the setting and the sets that were created, in particular the border crossing sequence, which is very interesting.
'Blunt, Brolin and Benicio' is another fifteen minute discussion, with input from the stars, about the main characters and how the actors felt about them and how they inhabited their roles. It's really not very interesting and no one says anything very enlightening. If you've seen one of these press junket pieces, you've seen them all.
'A Pulse From The Desert' is a seven minute discussion with Johannsson about his work on this film and his work with Denis. Not bad.
And 'Battle Zone' is a disturbing little feaurette, mostly with screenwriter Taylor Sheridan, about how he came up with the idea for the film, as well as a look at the detrimental effect the Mexican cartel and all of its accompanying violence has had on the city of Juarez and on the drug trade even within America. Features a number of real images of cartel activity that I would have liked not to have seen. It does feature a warning though.
One extra I was disappointed to see absent was a commentary track. Denis is a very thoughtful man and interesting to listen to. It would've been nice to have him guide us through the film from beginning to end. The cast popping in would've been fun too. Oh well.

Verdict: Don't get me wrong, this is a great movie about a pressing topic that should be seen if you have any interest in films about the cartel, about the drug trade or about Americas various arms of law. All I'm saying is it's unpleasant to watch and to think about. It's very dark and ends quite cynically and as such I doubt I'll return to it often.
I will however return to this reference quality blu-ray as a way to show people how good blu-ray's can look and sound. A lot of care and quality was put into this transfer and while you can buy it on iTunes for a couple of bucks less, if you want to own this movie, I'd strongly recommend splurging for the physical media. Even in spite of the fact that the extras are a little light and uninspired. 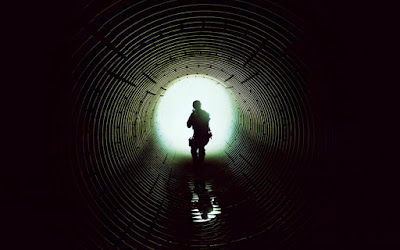