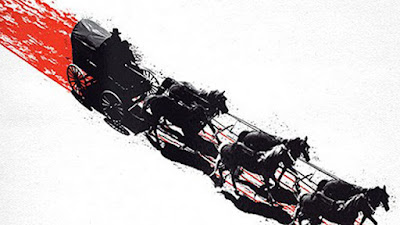 You can call Quentin Tarantino many things, but you can't call him insincere when it comes to movies. He's spent the entirety of his career using the vast chasm of cinematic memories he's filled his noggin with to create tributes to them. To some, he is a plagiarist. There is nary a sequence in any one Tarantino flick that wasn't in part or wholly lifted from another film. But he'll be the first to admit it. "I steal from every film ever made" he once said in an interview. So fair enough, let him. There is no shortage of aspiring and established film geeks ripping him off either. It's the circle of film life and it's ok, as long as what is being stolen is being reimagined, which is something Tarantino is a genius at.

In The Hateful Eight QT probes not only the snowy western sub-genre, particularly effective in the Italian film The Great Silence (1968), but in close quarter mysteries like The Thing (1982).
As far as the movie itself is concerned, The Hateful Eight is a long, drawn out mystery set in a cabin on a mountain in Wyoming. There is a blizzard raging outside and inside, where eight people have come for shelter, no one is what they seem and everyone is suspect.
This is a great premise, not overly original perhaps, but ripe for plentiful pretzel twists and delightful double dealings.
In Tarantino's hands, the film becomes about much more than just who is out to get whom. There are conversations about the morality in hanging someone, about the civil war and about race. This last topic gets a lot of screen time and much has been made already about Tarantino's use of racial epithets throughout the film. I don't personally feel one way or the other about it. Yes, there are a lot of N-words in The Hateful Eight, but there are a lot of N-words in many of Tarantino's flicks. I just watched Jackie Brown (1997) again the other day and that movie is filled with the word. Tarantino's argument is that he isn't saying the word, his character's are. I get that. As a writer of far less accomplished fiction than Tarantino, I've written many characters over the years who say things I never would. And at the time The Hateful Eight takes place, right after the Civil War, race relations were a big topic and African Americans were not well treated.
Besides, unlike Django Unchained, which had quite clearly defined good and bad guys, every one of the hateful eight are pretty bad hombres.
And in Quentin's hands, that means a whole lot of loooong, edgy monologues.

I have to say, as big a fan as I am of the man, I too can get Tarantino fatigue. There are sequences in some of his films which are so self indulgent, they can get on my nerves. And The Hateful Eight is no exception. In its digital form, the film is a slice under three hours. In its Roadshow 70mm form, it's a slightly wider slice over three hours. The Hateful Eight is a two and a half hour movie. That extra thirty to forty minutes is proof positive that Tarantino is his own biggest fan. Many of these monologues could have been tightened, there are a number of establishing shots that go on too long and there are scenes involving blood and gore which seem to test just how much the viewer is willing to take.

That being said, this film runs much smoother, makes more sense and plays a whole lot better in its 70mm form. 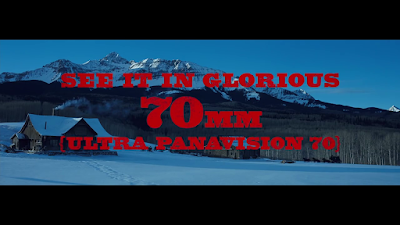 I saw The Hateful Eight in both versions and it was obvious that it was made specifically to be seen in 70mm film, at it's 3hr and 8min entirety, which includes an overture and an intermission. This is Tarantino's tribute to the cinerama presentations of the past. Not a lot of films have been made entirely in 70mm Ultra Panavision 70. And there aren't a lot of theatres out there that have the proper projectors or screens wide enough to accompany such a specific aspect ratio and technology. Luckily I was able to check out one of only three Canadian theatres that did and I must say, it was an experience. The overture, the intermission, the depth and clarity of the image, the unbelievably wide screen. It didn't add anything to story per se, if you hate this movie, you would still hate it in 70mm, but it did add a lot to experience of watching a movie in the theatre, and the religion of that. Let's not forget, back when 70mm was in its heyday (the 70's), you saw a movie while it was in the theatres and then never again. There was no home video, no Netflix, no other chance but when it came to your town in its initial run. So it had to be an experience. I love that Tarantino is tipping his hat to that and I love that it will undoubtably encourage others to follow suit. 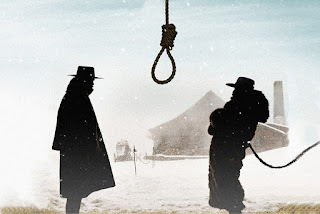 To sum up The Hateful Eight I would have to say what I say about all his movies. If you're a Tarantino fan, I'm sure you'll find a lot to love. It's definitely not his best film, but it's not his worst either. If, however, you aren't a loyal QT subscriber, you'll probably hate this film. If Tarantino's particular brand of self-aggrandizing gets on your nerves, this film will annoy the hell out of you. I would say it's far more sadistic and indulgent than anything he's done before and the amount of entertainment you get out of it will depend on how much exploitation cinema you can stomach. Not a fan of exploitation? Skip it. Because that's all it is, a big, expensive, albeit brilliantly acted and gorgeously shot, exploitation b-movie. Without the boobs.