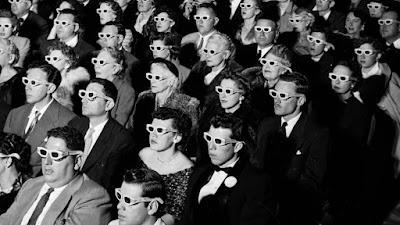 Three dimensional films have existed, in one form or another, since 1915. The first 3D film shown to an audience was The Power of Love, in 1922. You can only imagine the thrill audiences would've had watching a 3D image in 1922. And while I'm sure their 3D image was not quite as advanced as the one we enjoy today, it no doubt would've spun a few heads in the years before sound and widescreen.
Today 3D movies occupy a healthy portion of the multiplex arena, and while they're still mostly relegated to the family film or big budget comic book movie, they show no sign of abating any time soon.
But what most people don't realize, or have forgotten, is that 3D didn't really move beyond its initial niche to become a heavy hitter in movie presentation until Avatar broke every single filmgoing record there was to break in December 2009 and January 2010. 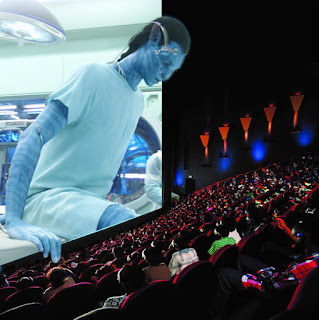 Avatar was made to be a 3D film and was perhaps the first time a filmmaker invented new technology solely to enhance the 3D image audiences would be seeing of their film. And it worked. Avatar was a jaw dropping experience. With its mix of fully computer generated characters, backgrounds and environments that were digitally designed to the smallest detail, and 3D that was, for the first time, absolutely essential to the viewing experience, Avatar ensured that if people followed James Cameron's example, 3D was here to stay. And from a studio standpoint, it proved that 3D was a viable commodity, with the potential to ring in big bucks at the box office, at a time when the ease of digital streaming and movie pirating meant that movie attendance was sinking ever lower.
Which brings us to the real query behind this gimmick: is it necessary? The last 3D boom was in the 50's. This is what many refer to as the 'golden era' of 3D. This is when the red and blue glasses came into being and when filmmakers started framing shots to accommodate the hokey effects of an object hurtling out of the screen at the audience, who were sure to gasp, duck and thrill at the magic of it all. But while it started as a gimmick of b-movie sci-fi and schlocky horror fare, it soon gained the attention of the majors and so called 'serious' filmmakers from Douglas Sirk (Taza, Son of Cochise) to Alfred Hitchcock (Dial M For Murder). It soon fizzled out again though and by the 60's 3D was relegated to 'special event' status. It came back again briefly during the 80's and 90's, but nobody really cared.
Then, in 2003, Ghosts of the Abyss, an event movie and underwater documentary about James Cameron and crew's expedition to explore the skeletal remains of the Titanic, was released on IMAX 3D, using all new technology, updating the rather dated 3D effects of previous decades. This was a huge success and sparked a slow revival that culminated in the release of Avatar in 2009 and helped, to an extent, revive movie going commerce. 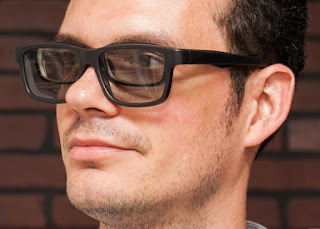 But is it necessary? On the one hand, no. From an audience standpoint, the gimmick of 3D wore off a long time ago and probably should have gone back underground by now. To many of us 3D represents little more than annoyances: heightened ticket prices; plastic glasses those of us who wear glasses on a daily basis must try to finagle onto our faces; darker screens; occasional double vision; occasional headaches or motion sickness. Plus, half an hour in you forget you're watching 3D anyway and the effect is gone. Personally, there are only a handful of films I can remember experiencing in 3D that made for a better experience than I would have had in 2D (including Avatar, Hugo and the rerelease of Jurassic Park). So not only would I rather see a movie in 2D, but when the theatre I'm at doesn't have a 2D option for the film I want to see, it annoys me to no end.
On the other hand though, the business of going to the movies is in decline. The aforementioned age of digital content is killing everything in its path. It has already consumed the big box video rental store (RIP Rogers Video, Blockbuster Video, Video Update and VHQ). It has killed off most of the places we can buy DVD's and blu-ray's (HMV is holding on for dear life and Best Buy still sells movies, although their selection is always  understocked, resembling the half eaten carcass of an antelope that a lion just could not eat another bite of). And it's having its effect on the multiplex as well. This has forced theatre chains and movie studios to constantly come up with bigger and better ways to show their movies. Gimmicks meant to enhance the moviegoing experience, while enabling them to boost the price of a single ticket, sometimes to a ridiculous degree. For example, if you go see a movie in IMAX 3D in a major metropolitan centre today, you are looking at between $22 and $25 for a single ticket. Or, you can wait six months (or less) and buy the movie outright, for less, when it shows up on iTunes. And then you don't have to worry about crowds, parking, overpriced popcorn, people on their phones, people talking, people in your personal bubble, lineups, dirty washrooms, sticky floors, strange smells, sick people coughing on the two rows in front of them and...3D glasses and all of the previously discussed annoyances they provide. Is it any wonder people aren't running to the theatre to see movies on their opening weekend anymore? 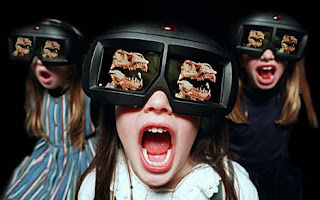 So it looks as though 3D is here to stay. And as long as people are willing to pay the extra $3 per ticket for those plastic glasses, it probably isn't going anywhere anytime soon. Will it still be here in ten years? No. Five? Maybe. Steven Spielberg and George Lucas have both said that if movie attendance continues to decline, there will come a time, in the not too distant future, when the cost of seeing a movie will rise to $50 per ticket. And the act of cinema going will revert back to the days when it was reserved for the upper echelon of society. Think about that the next time you see a surcharge on your Cineplex receipt. Or, think about the fact that you can wait a few months and see that movie in your underwear, in the privacy of your own home, filling your face with chocolate that doesn't cost $3.50 a bar and water that doesn't cost $3 a bottle. And you can even see it in 3D if you have the proper hardware (which comes cheaper and cheaper all the time). Either way.
Labels: Articles