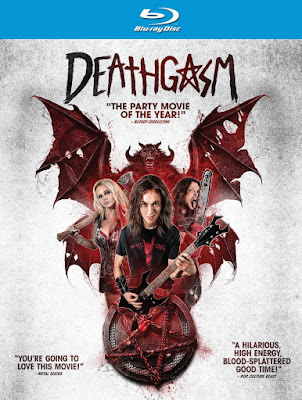 The Movie: Deathgasm was one of the funnest horror movies of 2015. It was also one of the bloodiest, and one of the loudest. And I mean that literally, as the film revolves around a group of metalheads who play a 'black hymn' they found under unscrupulous circumstance. As a result, they unwittingly open a portal to hell, allowing demons to infect the population of their sleepy New Zealand township, forcing them to take action, bloody, gory, gooey action, against the beasts and drive the boss demon back into the fiery pit below. So what's not to love? Metalheads will love it because it worships all things metal, and, you know, because of the hell stuff, and horror fans will love it because of how goddamn gory it is and because it features some of the most inventive and impressive kills of the year. Those looking for a true scare, or an arthouse horror with a slow burning buildup and an ambiguous ending, ain't gonna find it here. This is horror a la Evil Dead, this is the horror Peter Jackson started out with, before drowning himself in Oscars and Hobbits. But this is, crucially, lest you fear nothing but red paint and sausage links, horror with a heart. Yes, there is heart here. There are coming of age-isms and scenes of the true frustration of young love, betrayal and redemption. And theres a credit sting here that will literally lift you up (and, hopefully, point to a sequel. There has to be a sequel).
New Zealand has a rich history of horror, and Deathgasm (along with the recent What We Do In The Shadows and Housebound), adds to that history with gleeful aplomb. A fitting tribute and a heavy hammer.

The Presentation: Deathgasm is presented in 1080p on a single disc and the picture is mostly as sharp as you'd hope. There are a couple scenes, mainly near the beginning,  when the quality dips a bit, but I don't think that's the transfer so much as the source material. As you'll hear if you check out the commentary track, Deathgasm didn't have a big budget and they shot it with whatever they could, which occasionally meant lower quality equipment, but you can't rightly hold these filmmakers at fault for that. Hey, they went out there, begged, borrowed and stole as much money as they could, and made a movie they were passionate about that kicks ass. What have you done recently? Come to think of it, what have I?
The sound on this puppy is, quite appropriately for a movie that praises heavy metal so enthusiastically, amazing. As I said, this movie is LOUD. When metal isn't blasting from the speakers, the sound of demons being slayed does. And it all sounds great. It's mixed very well and charges at you when you've got it cranked, which is the only way you should have it. I recommend doing what I did, if at all possible, and enjoying it with a pair of wireless headphones. That way you won't wake the neighbours with your devil music.

The Extras: The best extra on the disc is the commentary track by director Jason Lei Howden. His guidance through the movie is informative, impassioned and filled with lots of great tidbits about metal, about gore and about the process of making your first flick. There are occasional pauses, but nothing near as bad as I've heard on some commentary tracks, where you actually wonder if the commentator left the room to take a leak and just left the recorder running.
There are also some neat, but pretty standard, making-of featurettes. About the cast and Howden again speaking on some of the things he touches on in the commentary. The best one is about the effects and how they were conceived and achieved. This film has a lot of really cool effects for something with such a small budget. I am thoroughly impressed.

The Verdict: I know it might seem as if my lips are sown to Howden's ass, and they might be, but I just love this movie. Look, this shit isn't going to be considered for Oscars or BAFTAs or Golden Lions. It isn't out to revolutionize the genre or redefine the industry. This is just fun, unhinged, bloody stuff that loves its genre movies and loves it metal. And it succeeds at nearly everything it tries.
The blu-ray is a solid, good looking, amazing sounding disc, with a great commentary and a few informative, but somewhat forgettable featurettes tagged on. I must admit, I was wanting more in the extras department, but I'm still satisfied with what's on offer.
All in all, great movie, solid disc. Buy it.