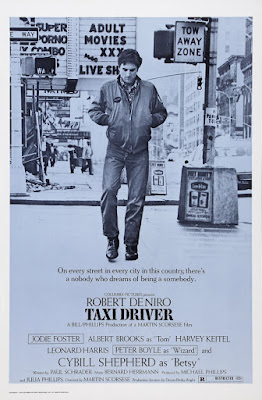 Forty years ago this month, Martin Scorsese made his mark. Before Taxi Driver, all Marty had to show for himself as a filmmaker, aside from a couple of student films nobody had seen, was a no budget exploitation movie for Roger Corman and a gangster pic he made with some friends, in his neighbourhood, again for very little money. But Mean Streets was extremely well regarded by those who saw it and without it, he would not have been given the $1.3 million dollars needed to make this classic film.

Everyone has seen this movie. And anyone who hasn't must know enough about it to know they don't want to see it. So I'll skip the synopsis and get right into what makes it so special even forty years after the fact.

If you didn't grow up in Manhattan in the 70's, or if you did and grew up in the nicer parts, then Taxi Driver is your ticket to the seedy underbelly of America in 1975-76. It's a scary place. Crime literally spills off the sidewalks and into the streets everywhere you look; pimps and prostitutes hold street corners like lampposts; the threat of violence hangs in the air like a blade; sex and sodomy could lurk behind any door you might open and drugs provide the fuel for all of it.
We see these things in Taxi Driver because Travis sees these things. As he creeps through the city streets, the streets live and breath. They are a monster and he is their slave. He crawls down 42nd Street, like a carriage in damnation, looking for a demon to take from one level of hell to the next, while stream raises up around him like literal hellfire and liquid batters his windshield, distorting the view of ugly neon that shines down from porno marquees and all night diners. New York is a beast with multiple personality disorder. It's efficient daytime persona, welcoming men, women and children to experience the many gifts it has to offer, offset by its nocturnal persona, spewing forth nightwalkers who prowl the sidewalks and disappear into shadows, those bottomless pits of the unknown.
And yet, Taxi Driver is an uncommonly beautiful film. Scorsese uses nonlinear cutting, close up inserts and a camera which is either overly patient with the objects it sees, or is anxiously trying to cut away from them before we've had a chance to get a good look. He does this to jar the audience. But rather than keep us on edge, these techniques (he borrows many of them from Godard) enrich the film with a visual patter that sucks us into it, even in its most harrowing moments. 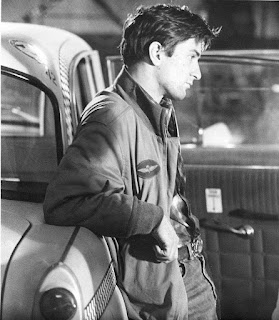 Travis himself is unaware of any such beauty, as he aimlessly coasts through the first third of the movie, bored, lonely and unfulfilled. A man simultaneously out of place in the world he occupies, while at the same time a product of it. We aren't given a backstory for Travis. No idea of what his childhood was like, or where he went to school. It's almost as if he was born in the street, in the middle of the night, spewing from a sewer hole onto the pavement fully formed. We know he has parents, and that it means something to him that they see him as an important, successful man, but we don't know anything outside of that. And really, it's as much that his parents could be a figment of his imagination as that they are real living people.
Travis is a sad character, certainly one of the saddest in all of American film. He seems to hate his surroundings, but any time he tries to step outside of them, to exist in the 'real world', he fails miserably. Look at the films most heartbreaking scene: Travis scores a date with a beautiful blonde, a real angel. He takes her to the movies, but instead of going to see Network, Murder By Death, or even The Enforcer, he takes her to a porno flick. He doesn't do this to try to hit on her, to coax her into sex later on, or because he's a pervert. He does this because he thinks that that's what people do. That this is a completely acceptable venue for a first date. She runs out on him. Later, when he phones her to try to explain, although we can't hear what she's saying, we know she is rejecting him. The camera feels so bad for Travis, it can't bear to watch and pans away to an empty hallway beside the phone, waiting for the embarrassment to end.
This is just one sequence in the film, but is Travis in a nutshell. Is it that he is so innocent, he doesn't understand how to act proper, or that he is so bereft of innocence that acting proper doesn't enter into his mind?

As the film traces Travis' journey from awkward and alone, to the man with a mission second half, and eventually on into the notorious finale, it becomes clear that Taxi Driver is about more than what it appears to be about, and although the final act is filled with carnage, the film actually ends on a happy note. Travis has found purpose, he has found something that has given him worth in his own eyes, if only briefly. And he has taken on the demons which hold him down, as though staging an attack on hell itself for all those years of imprisonment.

I guess at the end you could read Taxi Driver in a number of ways: as a portrait of mental illness; as an allegory of breaking free; as a meditation on the gritty side of New York in the 1970's; or even as the classic hero story.
Paul Schrader wrote the script while battling some of the same demons as Travis, while living in his car and dealing with ulcers and insomnia on the same streets as the film takes place. He would revisit these same themes of redemption and degradation to an even grittier extent, descending even further into Manhattan's seedy underbelly, in 1979 with the underrated film Hardcore.
But Taxi Driver is his masterpiece. It's a brave film to have written and Scorsese, with an acute understanding of what the script was trying to say and of the kind of man Travis is, brought it life with great care and talent and it isn't hard to see why he went on to become America's greatest living film director. 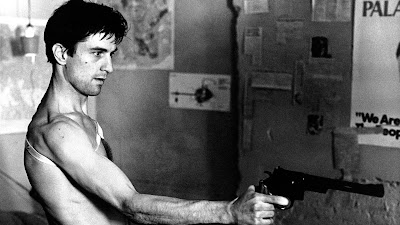 I want to quickly mention DeNiro before I sign off. Again, there isn't much that can be said that hasn't about this performance, easily one of the most iconic in film history, but without DeNiro, Taxi Driver would not have been the success it was. As he did so well with all of the characters he portrayed in the first few decades of his career, he infuses this very flawed, difficult man with a humanity that holds a mirror up to anyone who watches the film, even if only in a passing reflection. Simultaneously sad, sweet, strange and frightening, Travis Bickel is the bedrock upon which all of the 'difficult men' that pervade our television shows today are built. Without him we would have had no Tony Soprano, no Walter White, no Donald Draper and no Jimmy McNulty. And without DeNiro, the actors portraying those men would not have been as good as they were in those roles.

Remember that the next time you pass a mirror and wonder if it was, indeed, talking to you.
Labels: Classic Review