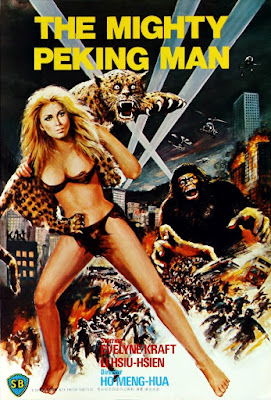 There are those who 'get' bad movies and those who don't. In order to get a bad movie, i.e., in order to enjoy a bad movie either for, or in-spite of, its badness, you must see the forest for the cheese.
Take my wife. I pop in The Mighty Peking Man tonight, she watches ten minutes, and leaves the room in disgust, proclaiming the movie unwatchable to the point of actually getting angry at its piss-poor production values.
Now take my eight year old son. He walks into the room and he doesn't see production values, he doesn't pay attention to the Godawful overdubbing or the nonsensical plot, he just sees a giant monkey man destroying shit. He loved it.
I exist right in the middle of the two. I do see all the cheesy, silly, nonsensical aspects of the movie, but I don't care. I love it anyway.

The movie is easy to summarize. King Kong in China. Done. The story of Kong was remade in 1976 in America and despite receiving a lot of flack over the years, made a shit-ton of money when it came out all over the world. The great Shaw Brothers in Hong Kong picked up on this and wanted a piece of that money pie for themselves, so they commissioned this fine film of inspired lunacy. And despite the fact that the film looks as though it was made over a weekend for whatever change was in the director's pocket at the time, the film actually cost 6 million in Hong Kong dollars and took a full year to complete.

So here's the thing with this movie: I don't think it qualifies for so bad it's good status. Because in order for a film to fit that category, the film must so unbelievably bad, and have so little in the way of value or apparent talent behind it, that you stare at the screen and laugh in utter disbelief. In Peking Man, there are legitimate wow moments on display. First of all, this movie looks like it was dangerous with a capital D to make. There are many sequences in this film where I was sure I was seeing near death experiences. Nowhere is this more evident than in the first act, where our lead characters dance and play and fight with real live tigers and leopards. I mean there's a moment where the blond bombshell jungle woman literally has a leopard under the arms and is tossing it around like a rag doll. And this leopard does not look like it's having fun. Point of fact, it looks like it wants to rip her pretty throat out. Later on there's a burning building sequence where factory workers are running for their lives amidst a wall of flames and just before the shot cuts, someone falls off of something fully engulfed in flames (!) Part of the show?

So there's lots of holy shit moment to admire, but there's also lots of just shit moments that slog and drag and require a certain amount of cinematic endurance. The movie does look like crap most of the time, although there are a few beautiful sunsets. It's also painfully obvious when the filmmakers are using miniatures, backdrops, painted walls and styrofoam cement. But a lot of fans of the film think this just adds to its charm. A kind of spiritual cousin to Ed Wood, Jr. stapling paper plates together and hanging them from a string and calling it a UFO, thinking no one would notice. If nothing else, it's entertaining.

The Mighty Peking Man, for all of its faults, is just a fun movie to watch. It starts completely bonkers, ends in a torrent of chaos, and even in the slower second half has moments worth watching, pretty much all of them involving staring at the gorgeous and scantily clad Evelyn Kraft, with her bouncy cleavage and perfectly manicured nails, applied makeup and plucked eyebrows. And all of that after spending her entire life raised by a giant ape in a jungle. Impressive. No wonder the ape has that hilarious temper tantrum when he catches her kissing on Danny Lee.