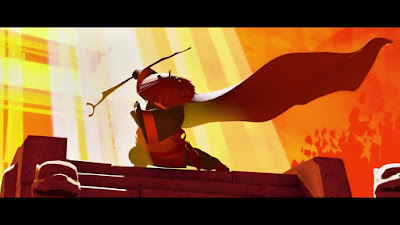 Po is back for his third adventure and I'll just skip right to the good part: This is his best adventure yet.
This time Po is facing off against Kai, an immortal bull-type creature from the spirit realm, who is going around stealing the 'chi' (which essentially means the soul or spirit) from famous kung fu warriors. As his evil quest brings him to 'The Dragon Warrior' (that's Po, if you haven't seen the other films), Po must prepare for his toughest battle yet.
But Po is preoccupied. He has just been reunited with his biological father, who has introduced him to a secret land of the pandas high on a mountain, where pandas do little more than relax, eat, sleep in, and be merry all the time. When Kai brings his fight to the panda village doorstep, Po must teach the pandas to get off their asses and fight. But can he do it in time?

One of the best things about the Kung Fu Panda films is their art direction. All of these films are beautiful works of animated art. But KFP3 really outdoes itself in that department. This is flat out one of the most beautiful animated films I've ever seen. In a number of different sequences, using a number of different animation styles and techniques, we are treated to a visual smorgasbord of rich landscapes and intense kung fu battles all bursting with rich colour that pops out at you (even without the 3D glasses). 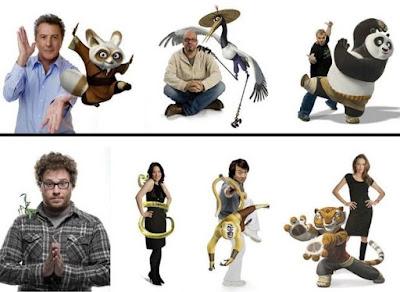 Another fantastic aspect of this film is the voice cast. Again, this is one of the best voice casts in animated film: Jack Black, Dustin Hoffman, Angelina Jolie, David Cross, Seth Rogan, Lucy Liu and Jackie Chan are the main group of deadly fists. But check out this supporting cast: J.K. Simmons as Kai; Bryan Cranston as Po's dad Li; Kate Hudson, Wayne Knight, James Hong. They all give fantastic performances and all help elevate the movie.
As fun as this movie is for parents, it also has a lot of great messages for kids: Be yourself; be happy with who you are; never give up; prioritize your family; don't lie; don't cheat; keep pushing yourself to be the best you you can be. The whole Kung Fu Panda series revolves around a panda with once low self esteem who found it within himself to be the saviour of his village and one of the greatest kung fu pandas of all time. Those are great messages for kids (and adults) to leave the theatre with. Without it ever feeling preachy or cheesy. Those are the messages I want to instil in my own kids. And if they can get that while also getting a healthy blast of eye popping entertainment, well, that's an afternoon well spent. 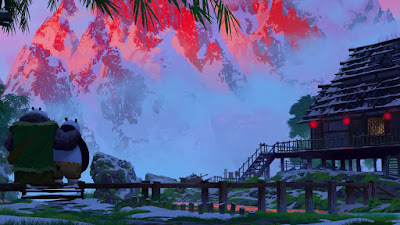 As the third in the series, and considering the second one was a bit of a disappointment, I wasn't expecting much of Kung Fu Panda 3. I mean how many different stories can you tell about an overeating panda who knows kung fu and must protect his village from invading marauders. But the filmmakers of this chapter managed to find something new even within that formula and to tap into something on an emotional level as well. They were able to take what was so special about the first two films and place it in a new setting, with a new foe, some great new characters, and an increased focus on the beautiful art direction and animation. What resulted was the best animated movie I've seen since Inside Out and the best movie (so far) of 2016.
Rating: ****1/2 skadoosh's out of five.