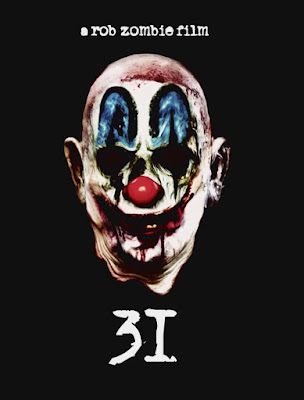 Do you like clowns? No, of course you don't, why would you? Look at them, they're terrifying. As far as I'm concerned, there's no such thing as a good clown, they're all evil.
So it makes perfect sense that Rob Zombie would base his new movie on the bastards.
At least, it looks like he has. Truth be told, I know nothing about Robbie's new movie. I haven't seen a trailer or read a synopsis. I know it's out already in limited release, but I probably won't catch it until it comes to digital.
Whatever it's about though, just look at that poster. My God. Anyone who knows anything about my tastes, or who has read one of my poster of the week posts, knows that I'm a sucker for minimalism. And this is why. What more do you need for this 31 movie? A beaten up clown face sneering against a black backdrop, with titles in typewriter font. I'm sold. Zombie's movies can be hit or miss affairs, but I have high hopes 31 will fulfill its poster's visage of sheer terror. Then again, exploitation movies are known for promising more than they deliver.

Labels: poster of the week