Poster of the Week: Alice Through The Looking Glass 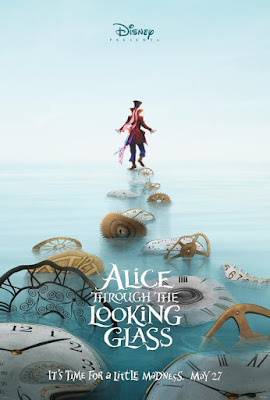 I'll start by saying that I'm not a fan of Tim Burton's Alice In Wonderland. I thought it was over the top eye candy with high camp and little of the heart and mystery that made the book and the Disney movie so special. But Burton isn't helming this sequel and while Johnny Depp will return to his role as the Mad Hatter for the film, I'm beginning to feel as if Depp is in danger of entering DeNiro territory (i.e; taking any role as long as they pay him enough).
So I have high hopes that Looking Glass will rise above its predecessor. But even if it doesn't, hey, at least this first American poster is cool. It strikes just the right balance between bonkers and beautiful and seems to hint at time warps and mad hatting mischief. It also looks like a full blown cartoon, which could inadvertently hint at the same overabundance of CGI that the first film was guilty of.
I'm willing to keep my fingers crossed though and unless its tomatometer rating upon its release is in the 10's or 20's, I'll give it a whirl when it drops on May 27.
Until then, I expect this isn't the last we'll see of Mr. Hatter prancing through this movie's marketing campaign.

Labels: poster of the week