Pictures for a penny (ante) 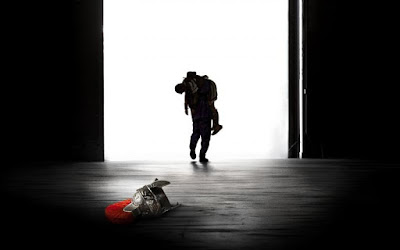 Heres a film almost bereft of point, but filled to bursting with the little details. A film which takes great pride in recreating Hollywood's yesteryear, and in crafting it with a very loving hand, but which, strangely, seems to care little about infusing it with an engaging narrative through-line. And what we're left with is another Coen brothers exercise which seems sure to alienate anyone in the audience who doesn't share in the wink and the nod.

The premise, such as it is, involves a movie star, played by George Clooney (who is always at his best playing the doofus in Coen bros. flicks), who is kidnapped by communists intent on holding him for ransom, demanding the studio he works for pay them $100,000 in exchange for their star back. Money the communists intend to use for 'the cause'.
While all this is going on, we follow the man in charge of physical production, played by Josh Brolin, at a major film studio, Capitol Pictures. This man's days are filled with all of the headaches and micromanagement that is keeping a movie studio afloat, his days starting at 5am and going late into the night.
And that's about it. The story is light, often silly, goes nowhere, more or less, and leaves you wondering what the hell the point was when it's all over.

The point to me, however, is not the superfluous narrative, but the care and attention given to the wheelings and dealings of the Hollywood studios of old.
As we walk onto a variety of stages and witness a number of movies in production at the studio, all of which look to have more interesting plots than the movie we ourselves are watching, we're treated to a triptych of beautifully choreographed dance numbers and grandly realized movie within a movie scenes. These are the best parts of the film. They have the air of authenticity about them and look as though the filmmakers spent the most time getting them right.
There are also premiers and gossip columnists and finicky directors and stars behaving badly and confessions and ego. It all feels as if it was done by those who were there. Which is impressive because the Coen brothers weren't there. They didn't make their first movie until 1984. And I don't think they've ever made a film under the auspices of one of the major movie machines.

For quirk, I would say Hail, Caesar! is most closely related to the Coens spy spoof Burn After Reading. In terms of performance, particularly George Clooney's, I would say it's most like O Brother, Where Art Thou? But in terms of a film that feels like it was made for the Coens, by the Coens, Hail, Caesar! joins A Simple Man and even Inside Llewyn Davis as an entry in their impressive cannon which seems prepackaged to split the audience into those who 'get it' and those who don't, and those who don't care that they don't and love the movie anyway.
So, if you're like me, and love the minutiae of the workings of a movie studio, then the episodic structure and wonky pace of Hail, Caesar! won't bother you a bit. But if you're someone looking for a Coen brothers three act whodunit with a belly full of laughs and a barrel full of thrills, well, Fargo plays just as well today as it did in 1996. Enjoy.