Review: The Smalls: Forever Is A Long Time

Un-breaking up is hard to do

I was a generation too young to really appreciate The Smalls while they were in their heyday changing the lives of fans and bands across (most of) Canada. I also grew up in the Toronto area, which was always a notoriously difficult market for The Smalls to break into. As such I didn't hear about or discover their music until I was well into my 20's. But the great thing about The Smalls is that no matter what your age when you first discover their music, it hits you like a ton of bricks.
This sledgehammer didn't hit any harder than in their home province of Alberta, where the band developed a large, rabidly loyal audience of twenty-somethings that adopted the band's music as the soundtrack to their lives throughout the 1990's.

When the band called it quits in 2001, many of these fans thought their farewell shows in Calgary and Edmonton were the last they'd see of The Smalls in a live venue. But thirteen years later The Smalls returned for a short tour and filmmakers Trevor Smith and John Kerr were on hand to document this 'slight return'.

In a lot of ways Forever Is A Long Time is the quintessential statement on the band. More than just a backstage pass to the reunion tour, the documentary examines every facet of the band's career and unearths performance videos and candid moments caught on tape going all the way back to 1990. Along with the band members themselves, the filmmakers  interview a bevy of people connected with the band during their time together, as well as fellow scenesters like the legendary Chi Pig of SNFU and a whole host of fans eager to speak on what a life enriching band this was, and is, to each and every one of them.
To back up these declarations of praise, the film weaves footage of the band's reunion tour throughout and shows us that this band has, remarkably, not only not forgotten how to play their instruments, but sound better than ever.

I don't know that I would ever have thought to ask the questions this film goes ahead and answers anyway in regards to the band members themselves and their thoughts on the band past and present. All four of the members speak very candidly about their hopes, fears and regrets as far being in this band is concerned and by the end of the film you truly feel like you've known these guys for years. There is something relatable in every one of them. They are all humble, easy going guys that have the flaws and foibles we all have, but also happen to have this band that means so much to so many people.

One thing I kept wondering while I was watching this film is where the drama is going to come from. I think after years of compulsive movie watching, my brain is hard wired to automatically look for the three act structure in the things that I watch. So I kept waiting for a big revelation to come, some juicy piece of gossip that reveals why the band broke up. Maybe a drunken fist fight, or some Motley Crue heroin abuse, or Ramones girlfriend stealing, ending with two of the members vowing never to speak to each other again. But it never came. Yes, one of the members confesses that his drinking got out of control at one point, but the dissolution of the band seemed to be as natual a progression for its own specific arc as starting it was. And as starting it again was in 2014.

Which really is the most succinct point that Forever Is A Long Time makes at the end of the day. This isn't some VH1 Behind The Music tell all with rock star posturing and egos clashing. This is a document of an unassuming band of regular dudes from the Canadian prairies who made their bones playing the dingiest dives and dirtiest halls. Who played to five people in one city and five hundred in the next and took it as it came and made something beautiful together that touched a lot of hearts and changed a lot of lives. That's the spirit of this band, that's the spirit of this film and that's the spirit of the independent music scene at its heart. Forever Is A  Long Time conveys that beautifully and should not be missed. 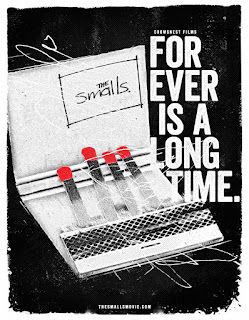