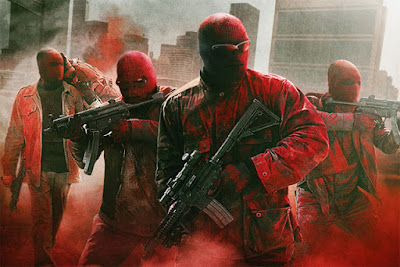 I need to write this review tonight because the longer I let this movie sink in, the more numerous and pronounced the plot holes will become.

Triple 9 is a movie about a gang of bank robbers who pull off a couple of dangerous 'one last one and we're out' jobs. But crime doesn't pay and the 'one last' jobs never go as smoothly as they should, do they?
Despite opening with a heist and its aftermath, as all of these movies do, I hated this movie for the first forty minutes or so. I literally could not stop name checking the movies it was ripping off. "Oh, there's Heat. There's Training Day. There's Die Hard With A Vengeance. There's The Town", etc. It got annoying after a while.
But by the second heist the movie started to heat (no pun intended) up, the bodies started to pile up and I became more invested. This is more as a result of John Hillcoat's orchestration of the events we've seen a thousand times before than anything else.
I love John Hillcoat as a filmmaker and I usually love his movies. The Proposition is one of my favourite westerns, The Road is about as close as anyone can come to properly adapting a Cormac McCarthy novel and Lawless, from a couple years ago, is a damn fine period crime drama. But those movies all had great scripts to work from, this one did not. The plot here is criminally undersold, we're given far less backstory than we should be, the characters are overdone caricatures and the unfolding of events are so predicable, they contain about as many twists as a pencil.
The dialogue is also trite and obvious and if it weren't thanks to such a talented cast spitting the words out, it would all fall flat. But there is a talented cast here and they do their best with what they're given. Two highlights, one positive and one negative, are Woody Harrelson and Kate Winslet. Woody's is the negative, as he is playing his exact same character from True Detective again, and in the same way. Actually, Woody's been down this road weary cop with more baggage than an airport route far too many times by this point. And Kate Winslet, this is a very dark and strange role for her. I had to (discreetly) check my iMDb at one point just to make sure it was her. She plays a bitchy Russian mob gal, who we never learn anything about other than that she is orchestrating these heists. She does alright, but again, her character is a cartoon spring loaded with your garden variety Russian mobster movie speak.

As I said, Hillcoat is great at what he does, and the moments when the movie shines are all his. His kinetic handling of the centrepiece heist is a highlight. As are a couple of genuinely tense sequences, including a foot chase through a dangerous city block and an assassination attempt in the dark inside a crumbling building. These elevate the movie beyond its poor imitation of likeminded flicks. Unfortunately, that elevation is only temporary and it doesn't take long until we're back in the land of the endless plot holes. 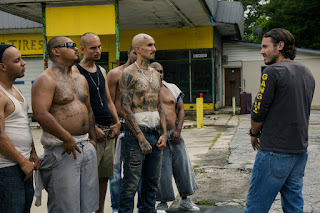