There is power in the blood 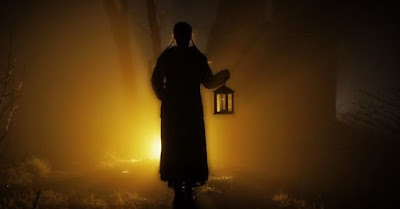 Old school fairytales...are demented. Honestly, there was something seriously wrong with The Brothers Grimm. All of these tales passed down from generation to generation, for children, meant to keep them in line. It's akin to sitting your child down today and showing them The Exorcist and saying that this is what happens if they don't say their prayers every night.
The Witch digs deep into the ancient library of New England folktales and pulls particularly disturbing elements from half a dozen or so, using them to craft a story, obviously, about a witch, but more to the point, about God and the devil.

It concerns a family of farmers living out in the middle of nowhere, on a farm that borders on an endless patch of the New England woods. The patriarch of the family is a fiercely religious man. So religious in fact, that he was banished from his last plantation for being too extreme in his views of what a good Christian should be.
While the family does their best to get by in their newfound isolation, strange goings-on plague their property, with rumours that a witch haunts the woods outside their home.

Now that right there is a hell of a setup for a horror movie. Based on the synopsis alone, you're going to walk into the theatre feeling uneasy. And I won't spoil anything more about the movie except to say that this film digs deep into the darkest parts of what made those Grimm tales so grim in the first place. It's also an astute examination of religion and faith, of spiritual warfare and, of course, of devilry.

The success of any movie depends in large part on the marketing. A good marketing campaign can made a crappy film a blockbuster, while a poor campaign can make a great film bomb. One appropriate and rather fortunate bit of news for the marketers of The Witch is the seal of approval given it by The Satanic Temple. Apparently satanists love this film and think it will do wonders for their cause. On the one hand, that's pretty cheesy (Yay, the devil likes my movie!), on the other hand it sounds like something the marketing people would make up in order to get assess in the seats (let's not forget the 'satanic panic' of 1973, following the release of The Exorcist, which helped make that movie the most profitable horror movie of all time). But if it did come right from satan's press agent, I can certainly see why. This movie is filled with dark, demonic imagery not seen to such great effect since Ken Russell's notoriously blasphemous The Devils from 1971.

Still, I don't know that I would call the movie scary. It's certainly an uncomfortable experience and certainly designed to make you feel uneasy throughout, which it does. And there are sequences that disturb. One sequence in particular, which occurs about five minutes in, was so disturbing for me personally, that I flirted briefly with walking out. But I stuck it out and I'm glad I did, because as uncomfortable as the images may make you, one of the most impressive things about The Witch is just how damn pretty it is. This is a beautiful looking film. Even with a shroud of grey draped over the entire movie like an itchy blanket, there isn't a single scene which isn't composed, or sequence shot, with the utmost care to craftsmanship and attention to detail. You believe this setting, you believe in this family and you believe that these things could happen to them. And that is also thanks in no small part to the astounding performances and the effective score by composer Mark Korven.

I do have a couple of issues with the movie though. For one thing, this film's dialogue is historically accurate Old English. That in and of itself didn't bother me, I think a lot of the dialogue is beautiful, what bothered me was that it was hard to make out. The incomparable British actor Ralph Ineson, who plays the patriarch, as brilliant as he is in the film, has a very deep, gravelly voice which ends up sounding very mumbled. When you mix mumbles with Old English, you end up missing a lot of the lines. The children were also hard to make out at times, but children often are. This complaint will be remedied though when the film is released for home viewing, thanks to subtitles (thank you subtitles!)
The other issue I had was with the ending. Not what happens at the end so much, but how the film goes about it. This movie is what you'd call a slow burn. It takes its time creating mood and atmosphere and tells its story slowly. It isn't interested in jump scares or cheap ghosts popping into frame with a sudden swell in the soundtrack. The Witch is much more about the creeping dread. This is all well and good until the last twenty minutes or so, where the movie speeds up to such an extent that it feels jumbled, rather than chaotic. Too much too soon. It almost felt as if director Robert Eggers had a checklist and realized that he needed to check off half a dozen boxes all of a sudden and then went about doing it.

The Witch isn't your typical horror movie. As I said, it takes its time and works on implanting images on your subconscious, rather than feeding you a bunch of momentary shocks that you forget about on your way out of the theatre. As such, it's a hard movie to shake and it belongs in the pantheon of horror that is now of a bygone era. Back when scary movies were as much about the craft as the scares.
This is one of the best made and executed films I've seen in a while, of any genre, and it has reaffirmed by resolution that between bears and witches, the woods...suck. Seriously, don't ever ask me to go camping or hiking or do anything in a densely wooded area. Ever. 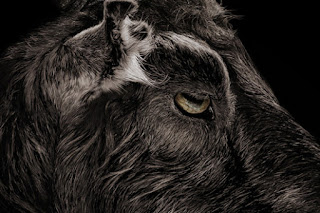