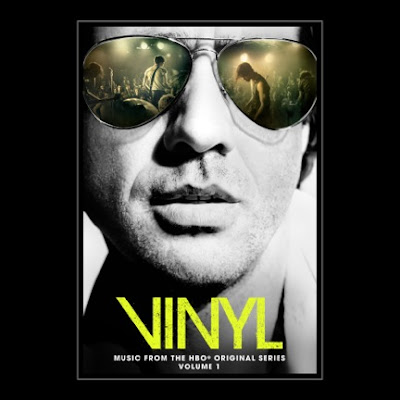 There's nothing wrong with a little rock n' roll. Unless, I suppose, if it's drowning in dirty deeds and debauchery. Which seems to be the focus of HBO's new hot topic show, Vinyl. Vinyl is about rock in the 70's. The excess, the all or nothing spirit, the pure unadulterated passion of playing it with everything you've got, and, as it turns out, with listening to it with everything you've got as well. For without the passionate fans, even the most passionate bands would wither up, dry out and blow away into the ether of the music that was, or wasn't, or might have been.

But this post isn't about the show. It's about the soundtrack to the show. I've only seen the first episode of Vinyl anyway, so I'm not qualified to comment on it one way or the other yet, but I'm going to anyway...it's awesome. And so is this very lively and perfectly curated collection of songs from the show's first season.

Depending upon your knowledge of rock music and your grasp of its history, this soundtrack could run as a mixtape you yourself would have cobbled together back when people were still making mixtapes (they call them 'Playlists' now). Or, it could be a great way to become familiar with a host of new bands and performers worth discovering. For me, it was a little of both. I know most of these artists, I didn't know about half of these songs though. Some, like David Johansen taking a run at classic New York Dolls cuts 'Personality Crisis' and 'Stranded In The Jungle', are updates of classic ditties. Or fine covers, like Dee Dee Warwick's soulful take on Elvis' 'Suspicious Minds', which is so good it threatens to best the King's original. And Foghat's dirty rock version of Muddy Waters's 'I Just Want To Make Love To You'.
Other songs are just good old fashioned gritty garage rippers. Perfect for a Saturday night rave up with your mates. The sensational Icelandic rockers Kaleo's massive 'No Good', Nasty Bits's punked out 'Rotten Apple' and Ty Taylor's straining blues kicker 'The World Is Yours' (not a Nas cover).
Pure soul is represented here as well. Otis Redding, my personal favourite soul singer, and just about the greatest voice to ever throw a note, hollers out 'Mr. Pitiful'.
Chris Kenner throws some doowop down with 'I Like It Like That', and Mott The Hoople reminds us why they were one of the best bands ever with 'All the Way From Memphis'.

I could go on and on describing what I love about every single song on this soundtrack, but I'll cut it short only to say that if the rest of this season is as good as the first episode was, and if I have all of these fantastic songs to look forward to hearing and experiencing within the context of said season, then Vinyl might turn out to be one of the best new shows on TV and another bonafide HBO classic. And then we can all say out loud that, yes, you can be a fan of a show called Vinyl without also being a hipster.