Thoughts on Batman Vs. Superman: Dawn of Justice. 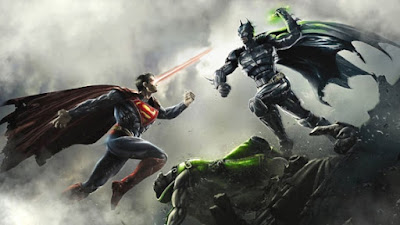 This has been a long ballyhoo'd event that DC fanboys have been froth mouthed over since Batman reemerged brooding and pissy in Tim Burton's Batman of 1989.
Of course, Batman had been brooding and pissy in the comics before Burton washed the streets of Gotham in oily black and gave Bats himself a sexy new rubber bod (I've always maintained that the Burton Batmans were the sexiest ones). Frank Miller gave him something to cry about in the graphic novels Year One and The Dark Knight Returns in the mid 80's. And guess who made an appearance in the latter? That's right, the man of steel himself. He isn't treated very kindly in that story and his eventual and unavoidable facing off against the dark knight provides Miller with some of the best pages of his career.

Zack Snyder, who is the director of the upcoming Batman Vs. Superman: Dawn of Justice, has said in interviews that the new film takes a lot of cues from Dark Knight Returns, as did Nolan's Batmans, as did Burtons. Really, people have been trying to adapt that brilliant comic into a movie for 25 years. So far, no one has come as close as Miller to telling a definitive Batman story, in either origin or sendoff.
But Snyder is going to try. And Batman Vs. Superman: Dawn of Justice has everyone all in a twitter (pun) of anticipation about the outcome.

Now I'm no Batman expert when it comes to the comics. In fact, aside from the Miller books, I've only read two other Batman comic book adventures, both of which were nonetheless amazing (Batman: The Killing Joke, by Alan Moore and Batman: The Long Halloween by Jeph Loeb and Tim Sale). Still, I think I am qualified enough to make this statement a full seven weeks before its release: Batman Vs. Superman is going to suck. I know, I know, I'm not the first or last movie geek to sit at his computer and type these pathetic prophetic words, but I still believe it must be said. Why? Because I have nothing better to write about today.

Let me make one thing clear though, and I've said this before: I am always on the side of the movie. Doesn't matter which movie it is, or what it's about. I always want the movie to succeed. I always want the movie to be amazing and I always enter into a movie with that hope pinned firmly to the inside of my chest. And I try to pick movies I feel have a fair chance of accomplishing this. Ergo, I'm not going to bother going to see the latest Nicolas Sparks adaptation, because I am willing to bet the third toe on my right foot (which is one of my favourite toes), that I will hate it. Theres always the possibility of it subverting my expectations of course, but it's a long shot. One I'm not willing to pay $12 for.
So I want this new Bat adventure to blow me away, and although I expect it to tank (in quality. I'm sure it will make a zillion dollars whether it sucks or not), I will have my most optimistic looking shoes tied tight when I enter into it.

I just don't buy what I've been shown of it so far. I like how they've made Affleck's Batman look the most like Miller's Batman since Miller's Batman, but I don't see Ben in that role. I'm not going to get mean about it, the way other people have been, because I think Ben Affleck is a very gifted actor and an even more gifted filmmaker (I can't wait for Live By Night). But Batman? We've seen gifted performers don the cowl in the past and sink like a stone (hi, George. Hi Val!) And I have a sense of impending doom when it comes to Ben under the bat ears. And speaking of talented people awkwardly cast: Jesse Eisenberg as Lex Luther? Come on.
I did really like Henry Cavill as Superman in Man of Steel though. And seeing as this movie technically resides within Man of Steel's universe, and is more of a sequel to that film than a reboot of the Batman franchise, I also predict that Cavill as Superman will be the best thing in this film.
As for the director? I really liked Snyder's take on Watchmen (aside from them wussing out on the ending. Read the graphic novel by Alan Moore to catch my meaning). I also dug Man of Steel more than those around me seemed to. And his Dawn of the Dead remake, while pointless, was a lot of fun. The 300 movies though? Not so much (I didn't see Sucker Punch). So I guess I have as much faith as trepidation at what Snyder will do with this titanic showdown.

And that's about it. Nothing too revelatory in my reasoning. No quotes you can print on a t-shirt. Just an overall feeling of skepticism based on the casting choices and what I feel will be a weak primer to the real DC slamabout: Justice League, which is already in production.

So while I'm rooting for the film to kick some ass, don't say I didn't say I told you so if it doesn't live up to its own hype. Then again, who cares if it doesn't, it's just a movie. And I'm just a geek pounding words out on a keyboard in the dark. A dark knight of the blogosphere, you might say. A wordsmith of steel...I need to get a life.
Labels: Articles