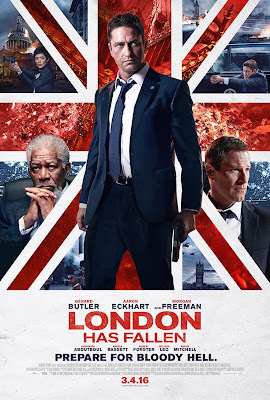 You can go into this movie in a frame of mind that will allow you to enjoy it, or you can go in with a frame of mind that won't. I didn't expect much from this Die Hard at the White House sequel (Die Hard Abroad). In fact, I saw on my way out the door that London Has Fallen is sitting pretty with a 26% approval rating at Rotten Tomatoes. So I assumed I was in for a slog.

If you saw Olympus Has Fallen, you'll get the gist: The POTUS is in trouble, bad guys are after him, however his faithful numero uno in the Secret Service is by his side, therefore he has an automatic leg up on anyone who tries to eff with him.
After the British Prime Minister dies of a heart attack, the western world leaders gather in London to pay their respects at his funeral. However, an evil man in a cave somewhere middle eastern has planned to eliminate all of these world leaders in one go in retribution for a G8 approved drone strike against him that saw him survive, but his daughter dead as a result of collateral damage. The Pres and his Service buddy are separated from the pack trying to escape and must face off against the army of terrorists who's only wish is to chop the POTUS's head off and broadcast it live across the world.

If you think that that sounds like absolute shite, do not go see this movie. Because, aside from a spoiler or two, that's pretty much all you'll find in this action feast of plenty. If you think that sounds like a hell of a good time, then good, because it is.
I enjoyed this film immensely. I thought it was loud, fast and violent in all the right places. The nonsensical plot and its many holes didn't really bother me because there was too much over the top action to allow me to stop and think about it. Besides, I truly don't think this movie set out to be anything other than what it was. Growing up in the 90's on just this type of flick, I know I have been programmed to go easier on it than many other people. The guy behind me was rolling his eyes so hard and so often throughout the movie, I think I could audibly hear them reversing back into his head at one point. I hope he got them down again.

One thing that works for me with this and with Olympus, which I also loved, is Gerard Butler. Butler has become a bit of a whipping boy of late thanks to a string of movies of questionable taste and quality, but I think he's great as an action hero. He's got a bit of Bruce Willis in him, a bit of Mel Gibson and, thankfully, no Nicolas Cage (I loved you in Bad Lieutenant, Nic!) When Gerard opens a can of whoop ass in London, he opens it hard, with clenched teeth and clenched butt cheeks too, probably. When he spits cheesy 80's action movie one liners, as he does often, he nails the delivery. He also has a super hot wife at home who he, unfortunately, does not have sex with (every good action hero must have sex at some point in the picture).
The rest of the cast is great too. Another thing people have been saying is that the talent here has been wasted. Not so. Aaron Eckhart, Angela Bassett, Morgan Freeman, Robert Forester and Jackie Earle Haley know what kind of film they're in, they saw the first one, and are willingly along for the ride. Melissa Leo, on the other hand, has one whole line of dialogue in the entire film, so whatever she was paid to reprise her role was too much.
I didn't recognize any of the actors portraying the terrorists, but they all do a fine job as well.

Is this film xenophobic? In a sense, yes, of course it is. Every fictional movie or TV show ever made portraying one country attacking another is, by the very definition of the word, xenophobic. Is it anti-Muslim, or right wing propaganda, as some have accused it of being? I don't think so. The fact that the terrorists masterminding the attack are middle eastern was probably not the wisest route to take, considering the dialogue raging in North America right now with its current political circus. But action movies were never the genre that practised political correctness to begin with. So if men with brown skin terrorizing people with lighter coloured skin bothers you then, again, do not watch this movie. As for myself, I am a left wing socialist leaning liberal who is staunchly against racism, xenophobia, cultural or racial prejudice, or, for that matter, homophobia. But I loved this movie. Why? Because it's fake. It's fake people. It's pretend. There is enough real xenophobia in the world right now to worry about without adding stuff that doesn't exist to it. So just sit back and relax and enjoy watching the London bridge fall down, while taking comfort in the fact that the real London bridge is safe and secure where it always was, and always will be.