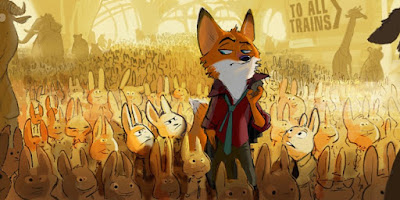 Zootopia is an important movie. Don't be fooled by the fact that it's animated, that it features a cast of animals, that it wears the Disney logo, or that it's aimed at the family film crowd. It has the guts to explore the things that are troubling our society right now. It has the foresight to understand that these things will probably always be a struggle, thereby ensuring itself timeless, and it has the brilliance to wrap it up into the folds of a cutesy story about a bunny and a fox.

The story goes like this: Judy Hopps is a simple bunny. She comes from a long line of carrot farmers. But Judy has her sights set on bigger things. She wants to move to the city and become a police officer. This is met with scorn at nearly every turn. Bunnies don't become police officers. Bunnies are too small. Predators and bigger animals become police officers because bigger animals are, well, big. But Judy won't let that keep her down and she puts every effort into passing the application exams with flying colours.
Once she gets to the big city, Zootopia, a place where evolution has enabled animals to live in harmony together, she is again derided even by her fellow officers due to her size and species.
Meanwhile, she meets Nick Wilde, a skilled conman and a fox. Through a series of amusing events, they are put on a path together to track down a missing Otter who has apparently gone 'savage', a derogatory term for predatory animals who have reverted back to their pre-evolved states and become a danger to those around them.

The first thing I'll say about this movie, before I get into the more profound aspects of its examinations, is that it's drop dead gorgeous. Zootopia is a massive city with a different neighbourhood area for all species. There's a rainforest, there's a tundra, there's a desert, there's a tiny city within a city for rodents, and a downtown district which acts as a melting pot for all species. The animation is superb and the vibrancy and detail of the city is so juicy it makes you want to bash your face into the screen and take a bite out of it. I truly, truly hope there are sequels on the horizon because Zootopia is a place I would love to revisit again and again.

Ginnifer Goodwin, who if you know her from anything will probably know her from the shows Once Upon A Time or Big Love, plays Judy Hopps. And she does really, really well. She strikes the perfect balance between sweet and determined and really helps bring Judy alive.
Jason Bateman plays Nick. Nick is a variation on characters Bateman has been playing his whole career, but he does well with the character and the chemistry between Nick and Judy works.

But Nick and Judy serve another purpose in the film besides just being a conman and a cop. They are both victims of racial prejudice. And this is where the movie really took me places I did not expect to go. In essence, the entire film is a commentary and examination on the things our world is dealing with right now, especially in North America, in regards to hate speech, racism and the cultural barriers that we are allowing to be built up between us.
Nick the fox is a fox. That means no one takes him seriously as anything other than a shifty, dishonest, predatory thief.
Judy the bunny is a bunny. That means no one takes her seriously as anything other than a tiny, carrot eating, cute little fur balll. She can't be a cop because cops are big and strong and generally not very cute. Cops must uphold the law and who's going to listen to a bunny?
As the movie's plot involving a number of predatory animals going 'savage' unfolds, the filmmakers take this concept further. Check this out:

A few animals have gone savage. They are all predatory species. An otter, a panther, etc. As a result, and partially as a result of the media, Zootopia is in an uproar (no pun intended). Fear mongering has caused a divide. Non predatory species are now fearful of predatory species. They don't want their kids playing together, they don't want to sit beside them on subways, predators are losing their jobs and their friends due to, in essence, the colour of their skin. There is a madman perpetrating this. There is someone in a leadership position telling the citizens of Zootopia that they should fear those who are different. That they should beware the species which are not their own. That they should build walls to protect themselves. Catch my drift? Let me make it even simpler:

Zootopia is America. The predators are muslims. The prey are Americans. The madman is Trump and Judy and Nick are any one of us.

I can't tell you where the story goes because it's spoiler territory, but let's just say that the moral of the story is that we don't need to fear those who are not the same as us. We don't need to allow the Trumps of the world to break apart our global unity. We are all in this together. A few bad apples don't spoil an entire orchard. And you can do and be anything you want.
Is that the kind of message you want your kids walking out of the theatre with? Because it's for damn sure the message I want my kids to catch. I had a long talk with my kids after the movie about what the movie was really about. About how we're all the same and can do anything we want and should never feel that someone is lesser than us because they are different. Or that we are lesser because we are different. We're all human, that's all that matters. My kids are good kids so they informed me I wasn't telling them anything that they didn't already know. However, my oldest son, 8, did say "even Trump?"
"Yes, son, even Trump."