Blu-Ray Review: The Night Before 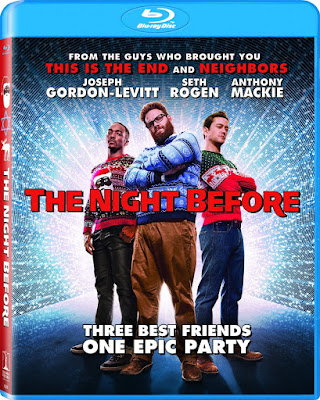 Movie: Here's the good news: you already know if you want to buy The Night Before on blu-ray. Yes, you do. You know this because you know if you are a Seth Rogan fan. If you are a Seth Rogan fan, and you find the new Hollywood comedy rat pack funny, then you will find this film funny. Very funny, probably. If you don't subscribe to this particular brand of gross out humour with a heart, you won't start now.

Also, if you like Christmas movies. But not just any Christmas movies, Christmas movies with a red capital R attached. Movies like Bad Santa, or Trading Places. Then, again, you'll like this one.
I don't know if it was the filmmakers intention to produce the crudest, most R-rated r-rated Christmas comedy ever, but I think they have. The Night Before has a lot of swearing, a lot of sexuality, is gleefully politically incorrect and even sports a scene of straight up graphic nudity in the form of a few hilarious Phone pics. But really, how could you not crude it up with this synopsis: Three best friends, who have gotten together every Christmas Eve for many years to hit the streets of New York and go wild, get together for one last big hurrah. Armed with a box of drugs, a Red Bull limousine, and an endless river of booze, they hit the streets of NYC one last time before they all have to 'grow up'.
Hilarity ensues.

Presentation: The Night Before looks good, most blu-ray's do, however I would scale this particular presentation closer to a really good DVD than a benchmark hi-def blu. The image is soft in places and in some scenes is downright blurry at the edges of the screen. The blacks aren't very deep at times either. Overall, not an overly impressive display, but it does the job.
The audio is much better. There's a lot of great music in this film, from a Run-DMC cover at a karaoke bar to an entertaining rendition of Kanye West's 'Runaway'. The dialogue is clear and the sound mix is well handled in the many bar scenes in the film, when things can get muddled.

Extras: Kicking things off is the Gag Reel. The gag reel is pretty sad. One minute long. There had to be more hilarity caught on camera between takes than that.

Christmas In Summer is an interesting little five minute featurette about shooting the snow set movie in the middle of summer in New York. They also touch on some of the locations and sets that were used.

The Drunkest Santas on the Block is some extra crudity in regards to the scene in which Joseph Gordon Levitt's character gets in a fight with the eponymous Kringles.
It feels like special feature filler.

Midnight Mass With Nana is a closer look at that particular scene. More filler.

Whale Juice is about Seth's scene where he imagines his future daughter a stripper and he and Jillian Bell's attempt to get through the scene without breaking up in laughter.

Making One Epic Party is the best feature on the set. And in some ways it makes all those three and four minute features that came before it kind of pointless. It's a garden variety behind the scenes feature with cast and crew interviews where everyone talks about how funny and amazing everyone else is. It's entertaining. 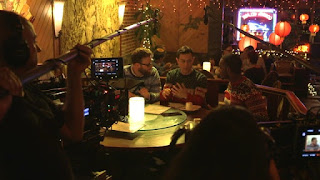 Finally, there are half a dozen deleted and extended scenes, many of which we've seen clips of in the featurettes. Some of them are funny, but for most you can see why they were cut.

Probably the biggest disappointment of the whole disc is the absence of a commentary track. It would've been great to have the three stars sit down and watch the movie together.

Verdict: Remember how I said you know before watching this movie whether you would like this movie? Well I knew that I would, because I like this type of humour, and, surprise surprise, I did. It starts off a little slow, but quickly picks up steam in tandem with Seth Rogan's first drug kicking in. I laughed a lot, sometimes until my sides hurt. But it was nice to discover that the movie, surprisingly or not, has a lot of heart. There are some very touching scenes and to the writer and director's credit, they don't feel out of the place with the cruder moments. Still not a movie you'll want to sit down and watch with Nana while waiting for It's A Wonderful Life to come on (unless your Nana is a whole lot of awesome). But a great movie to sit down and watch with your buddies and a couple jugs of spiked egg nog every Christmas season. 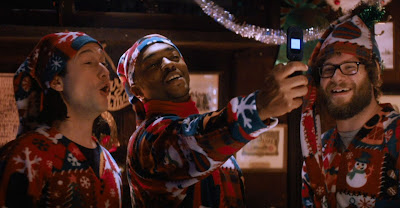