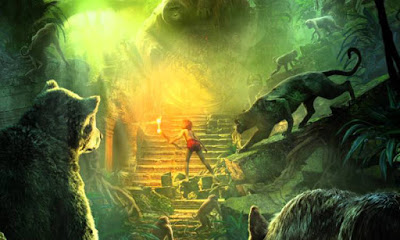 I hesitate to say that The Jungle Book comes with an eco-friendly message about our endangered rainforests and jungles, but, the writing is on the wall, to coin a phrase. There is a lynchpin within this story of a boy who wanted to be a wolf, and it is the presence of man and the destructive force he represents within the delicate balance of nature. In the film man is represented by fire, more specifically, but the 'red flower', the only thing in the jungle more fearsome and deadly than the sociopathic tiger Shere Khan.
To some, the red flower represents obliteration, plain and simple, to others, it is a tool with which to rule the jungle entire. In this way, it's not so far removed from the eponymous ring in J.R.R. Tolkien's trilogy of fantasy adventures.
So by the end of this particular yarn, the message is clear, and twofold: protect our jungles and forests, if not for the planet's sake, then at least for the sake of the animals that call them home; and be careful with fire.

I hesitate to point this out not because it is a message we need not hear, we need to heed it, and quick, if our own ecosystem is to stand a chance in future generations. I hesitate because I don't want you to think that this is a film that goops the message on so thick it hurts the entertainment value. Truly, if the eco message in this film were honey, it would not be nearly enough to satiate, say, a sloth bear, as sloth bears like their honey very thick indeed. But for those of us for whom a little honey goes a long way, the spoonful we get in The Jungle Book is about perfect.
Besides, there is so much beauty, adventure, excitement, humour and drama in this film, that any between the lines messages the filmmakers may or may not be including will be catalogued by the viewer fleetingly, if at all.

I'm certainly not the first to say this and I won't be the last you hear it from, but allow me to announce, as officially as my amateurish standing within the world of film criticism will allow, that The Jungle Book features the best, most photorealistic CGI in any film up to this point in history. The animals that populate the story do not for a second betray their simulation. If you were to go to your nearest zoo today and the animals within began conversing with you as any flesh and blood human might, it would look exactly as it does in this movie.
The dense, foliage packed jungles locations also give plenty of opportunity for the viewer to drop his/her jaw at the immense beauty of this film. 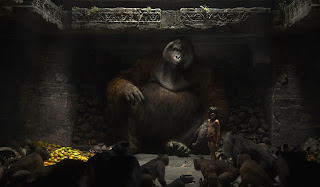 Bolstering the story and providing a fun audience connection is the work of the actors and actresses in the film. The standout performance is, of course, Neel Sethi, as Mogwai, the boy who was orphaned in the jungle and raised by wolves under the watchful eye of a guardian panther. Sethi was selected as Mogwai after a worldwide search and audition of thousands of young hopefuls. It's not hard to see why he won the role. Mogwai goes through a great deal of emotional peaks and valleys. He interacts entirely with computer generated costars and settings and he runs, jumps, swings and sings his heart out from beginning to end. It takes a very special child to do all of this and make it look natural. I'm looking forward to seeing what he does next.
A piece of genius within the film is the voice casting. Every single role could not have been better chosen: Idris Elba, Bill Murray, Ben Kingsley, Scarlett Johansson, Chris Walken and Garry Shandling, in his final role (sniff), elevate this movie to exciting heights of wonder and fantasy.

Jon Favreau, who directed the film, said in an interview that The Jungle Book was both an adaptation of the original novels, and a remake of the Disney classic from 1967. This explains why, seemingly out of the blue, Chris Walken, as colossus monkey King Louis, begins singing 'I Wanna Be Like You', in an effort to entice Mogwai to bring him the coveted red flower. It's a little more awkward and less refined than the way Favreau weaves 'The Bear Necessities' into the movie, but anytime a filmmaker wants to put Christopher Walken in their movie and have him sing a song is a-ok by me.
Although I've never read the original books, I, like most of us, did grow up with the Disney version and I have to say the loving winks and nods to its influence are nostalgically pleasing and provide a nice springboard of levity with which to bounce the more intense aspects of the story from.

The Jungle Book is an astounding film. The level of craftsmanship on display here at all levels of the filmmaking process is unbelievable. This is easily the best film I've seen so far this year and I can't wait to see it again.
Really my only qualm with the film, and I almost never, ever, feel this way about a movie, is that it's too short. I wanted more of everything. More Shere Khan, more Kaa, more of the fascinating elephants and definitely more King Louis. The Jungle Book is an epic adventure and deserves an epic length. But it's marketed as a family film and family films are never three hours long. I'm sure to any studio head worth his salt, a three hour family film spells certain death at the box office. So here's hoping for a director's cut when the movie hits the home market. Or a sequel, or three. Hey, if Iron Man gets three movies, than Mogwai should too. It's only fair.