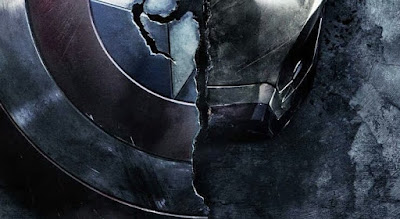 There was a band, ironically named War. Ironic because they penned some of the most positive, upbeat tunes popular music has ever known. One of these tunes, the impossibly catchy and simple 'Why can't we be friends?', has been a staple of pop culture ever since its release back in 1975. That song rang through my head while watching Civil War. I was actually a little disappointed they didn't insert that melodic brosif fist pump into the new Cap A movie at some point. It could've been used to great ironic effect right about the time the Captain was attempting to bash his shield into Iron Man's face. But I suppose the filmmakers wanted to avoid that level of tension releasing levity and focus instead on the bigger themes of superhero ethics, morality and revenge that pump through this Marvel entry like blood through the arteries.

I remember not liking the first Captain America movie. I didn't find Captain Rogers all that interesting as a superhero and the movie felt too bogged down in backstory and patriotism. I did, however, love The Winter Soldier. With all that exposition out of the way, they were free to focus on the darker side of being a superhero and being a human being who feels feelings, and the result was one of the darker and more emotional entries in the Avengers filmography.
This movie definitely continues on in that same vein. The Captain is again torn between his vow to serve and protect, and his loyalty to his friend, who is also a bad guy bent on destruction and chaos. It's an interesting conundrum and places pretty boy Rogers in some morally sticky situations.
It also places him on Iron Man's shitlist. The Avengers, well, what's left of them (Thor and the Hulkster are M.I.A.) are in the midst of answering for the rampant amount of secondary death and destruction they have caused in the process of saving the world's ass a bunch of times and are in danger of being (*yawn) decommissioned.
Tony Starks agrees that they should stand down for a while, Captain Rogers doesn't. They fight. Along for the ride are a rogue's gallery of Marvel super-dudes, who join in the battle on either Tony or Cap's side. Which side these special guests choose has less to do with who they feel is right in the fight, and more to do with whoever contacted them first. They end up serving little in the way of story or ethical gravitas, and are in the movie solely to provide it with opportunities for some big fat action extravaganzas. So as far as the narrative is concerned, their appearances are pointless. Fun though.

Going into this movie, and even during its first half hour or so, I was suffering superhero movie fatigue. Too much too soon. Between the Avengers movies, the Batman/Superman reboots and re-reboots, the Marvel universe solo outings and all the super stuff in between, I'm feeling the way I felt about Vampires ten years ago and zombies five years ago. Go away for a while. And I don't think I'm the only one who feels this way. For the first time in this franchise, I truly felt like Robert Downey, Jr. was phoning it in on this one. I know he's spoken in the press a few times about wanting to retire the Iron Man thing in his career (but what are you gonna do when they keep backing dump trucks full of $100 bills up to your house?) But he just didn't seem like he wanted to be in this movie. He seemed bored. I don't know what his contract looks like these days, but as good as he has been in the role, move on RD,Jr. Move on.
Still, Captain America brings its A game to the arena with Civil War and what results is a movie with the verve and energy of a movie that acts as if its the first in an entire franchise, rather than the first in the third phase (or fifteenth overall) in an entire franchise.
It's deep, dark, gritty and booming. For those of you who are still loving this avalanche of super movies, there isn't much to deride in Civil War. For those you who are sick and tired of super movies, well, Jennifer Aniston's new movie is probably playing in the same multiplex. Have fun.