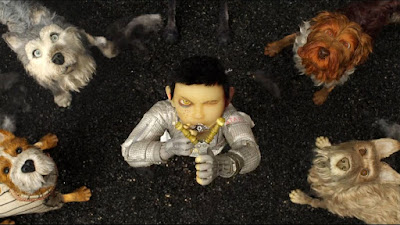 In the land of the hipster, one man is king. His name is Wes Anderson. In much the same way that Lucas did in the 70's, Spielberg in the 80's and Tarantino in the 90's, Anderson is the cinematic embodiment of the new millennium. His films reflect our obsession with all things vintage. If retro-fitted vogue was a movie genre, it would be filled with the films of Wes Anderson.
Some people gripe about this. Not me though, I love Wes' films. I love that their humour is dry British cheek, while their calculated frames and meticulous detail reflect America's obsession with itself. I love that the stories he tells are like classic literature with a twist of nihilism masquerading as levity. Like Dickens with a little Bret Easton Ellis, for spice.

My biggest compliment as far as Isle of Dogs, Anderson's second animated film is concerned, is also my biggest complaint. And that is that it is a Wes Anderson film. Which means solid and dependable, but without surprise. It is quirky, meticulous and self aware. Just like all his other films. I have to admit that while I certainly go to a new Wes Anderson pic to see a Wes Anderson pic, his filmography is in danger of monotony.

Isle of Dogs is perfect fodder for his stylistic sensibilities though and I really can't think of this movie in anyone else's hands.

The story goes that in a small city in a certain Prefecture of Japan, a dog flu breaks out, infecting the dogs and transferred to their masters and the rest of the city's population.
The city's cat loving, dog hating mayor banishes all the dogs to Trash Island, so named for obvious reasons, looking to eradicate the canine population once and for all.
Then, a boy steals a plane and it crashes on Trash Island. The boy is looking for his dog, Spots, and scours the island with the help of a few furry compatriots, to find him.

The best thing about this particular adventure is the look of it. This film is so beautifully animated (in stop motion, just like Fantastic Mr. Fox) and so wonderfully detailed, that even if you hate the story, you'll still get your money's worth at the marvel.
The cast, most of whom are Anderson alum, are also fantastic. Tilda Swinton, Scarlett Johansson, Edward Norton, Bill Murray, Bryan Cranston, Jeff Goldblum, Francis McDormand. Even Yoko Ono has an interesting, and fittingly weird, cameo. Anderson's films are always perfectly cast, and this one is no exception.

There are things about this movie that don't work, or are too wink-nod, in regards to its own self awareness, but mostly this is just straight up cinematic comfort food. The characters are fun, the story is cute, the humour can be surprisingly black and the animation and overall design are awe inspiring. It won't win over any Anderson nay sayers, and Anderson doesn't push himself far enough beyond his own boundaries to avoid predictability, but this is still the best movie I've seen in 2018.