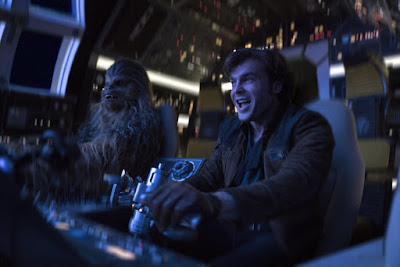 The picture you see above you is a perfect representation of this movie. In the simplest terms, Solo is a ride. It's fun, it's fast, it's silly. And it works perfectly as a Star Wars spin-off.

At its core, this a heist flick set in space. A space cowboy adventure featuring younger versions of characters we know and possibly love.
If you're a Star Wars fanboy, this is pure pleasure dome material. You get to see how Han meets Chewy. You get to see how Han meets Lando. You get to see how Han acquires the Millennium Falcon.
What you don't get to see is Han's run in with the pucker lipped Greedo. The job he botched on the beige marble of Tatooine. Or the other adventures directly preceding the events of A New Hope.
Personally, that doesn't bother me, but it seems to bother many other people. Every negative nilly review I've read on Solo seems to focus on the fact that this isn't the definitive Han Solo biopic. The one that fills in all the empty spaces on his resume.
It doesn't bother me because I'm not a huge Star Wars person. I don't need the whole picture, I just need the movie I'm watching to be good. And also because I highly doubt this will be our only Solo movie.
Short of leaving us on a cliffhanger, this movie does end in a perfect spot to set up its own sequel. And there's obviously a lot more story to tell as far as Han's adventures in outer space are concerned.

As far as this story's concerned? I'll share this gripe about this otherwise entirely pleasurable Star ride. The story the movie tells is pretty hackneyed.
In short, there is a very expensive, rare, explosive item that Han and some bandit friends want to steal. Botching their first attempt, they run afoul of some space gangsters and now have to steal even more in order to wipe their debt and keep their lives.
If you replace the rare item, called coaxium here, found in mines, with diamonds, replace the space gangsters with the Mafia, and replace spaceships with fancy cars and boats, you have every other heist movie ever made.
So the writing, in plot and atrocious and silly dialogue, is not good.
But in spite of this, the movie is.

Solo is directed by Ron Howard. Ron Howard knows how to make movies. Whatever the subject matter, if Howard is at the helm, it's probably going to be good and may well win many awards to boot. 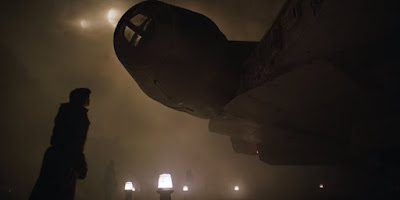 I would be surprised if this film won many awards, but it looks gorgeous. Befitting the subject matter, Howard has taken a page or two from the film noir handbook and painted the frames of Solo with dark, cloudy skies and foggy, shadowy streets. It doesn't reach Blade Runner levels of gloom, but let's just say there are no pretty, double moon sunsets to goggle at either.

If you are concerned about this feeling like a Star Wars movie and not drifting too far from the Lucasfilm blueprints, relax. There is more than enough Star Wars-ia within the runtime to erase any doubt that you are watching a movie set in that universe. Including a  Tie Fighter battle. You know Tie Fighters, don't you? The flying eyeballs with bowtie- looking ear-wings that sound like a constipated Wookie trying to take a dump? They haven't changed much since their first appearance in Episode IV.

And speaking of hairy assed Wookies, Chewy hasn't changed much either. I was thinking while watching Solo that Wookies must have dope lifespans because Chews looks as good in Solo as he does in Episode VIII. Then Han makes reference to the fact that Chewy is like 190 years old (!) in this movie. I'll have what he's having.

Another bit of bitching that I've read regarding this movie is the supposed miscasting of Alden Ehrenreich as Han. Apparently he's not Harrison Ford enough to sell that it's supposed to be a young Harrison Ford. Again, this didn't bother me. I think Alden is great. In fact, I think Alden is best when he's not trying to mirror Ford's mannerisms. Yes, this version of Han is more joyful and less pissy than the one we know and love in Episodes IV-VI. But that's due as much to how the character was written back then as to the fact that Harrison Ford is probably a pretty pissy person in real life. Sorry Harrison, but your resting bitch face tells many tales.

So who should see this? Everyone. It's fun for adults, it's fun for kids. It's fun for Star Wars nerds and for nerds who don't much like Star Wars at all.
Its story exists without so much as an ounce of originality, and the dialogue sounds like it was written by a twelve year old.
But it looks great, moves fast, has some great performances- holy cow! I just realized I didn't even mention Donald Glover as Lando Calrissian. See how good this movie is? I almost forgot one of the best things about it. 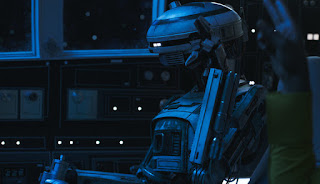 Time is money and I'm not trying to write a book here, so I'll keep it short. But in short, while Alden was best when he wasn't imitating Harrison, Glover is best when he is imitating Billy Dee Williams. It's not an out and out SNL-type imitation. But the small ways in which Glover incorporates some of Williams' speech patterns and cocksure swagger into his performance is a pleasure to watch and adds some nice nostalgic spice to the Solo cake. Glover's interplay with his sassy droid L3 (there must always be a sassy droid in a Star Wars movie, spin-off or not) is fun as well.

I didn't see Solo in 3D, and I don't think you need to. Although the first time the Millennium Falcon jumps into hyper-drive I was kind of wishing I had. Hyper-jumping through space in 2D is like eating an apple without removing the stem first. It just ain't right, man.