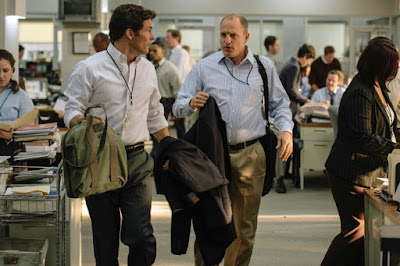 Knight Ridder, which I had never heard of before watching this movie, was at one point the second largest newspaper publisher in the United States. Shock and Awe is the story of when Knight Ridder was the only media source with the balls and attention to detail to challenge George W. Bush’s insistence that there were weapon of mass destruction hidden somewhere in Iraq.

Shock and Awe feels like an update of All The President’s Men. And in many ways it is. Only this time, the two reporters on a quest for the truth are doing so in wake of 9/11, rather than on the cusp of the Watergate scandal.

This is strange timing for a movie about 9/11. It feels awkward that with the Trump circus in full swing, director Rob Reiner felt compelled to remind us of the last bonehead president who sat in power of the most powerful nation on earth. Or does it? Is Reiner attempting to show us a parallel between these two administrations?
As the world would later understand, Bush Jr. lied to America about there being WMD’s in Iraq. He took it as an opportunity to settle scores started by his father.
Trump also seems to be using the White House with his own personal agenda in mind.
Both Bush and Trump seem to create their own agendas. They both seem to say whatever pops into their heads at any given moment, whether it has any bearing on the truth or not. If ‘fake news’ and presidents having Twitter accounts was a thing during the Bush years, it’s very likely we would see even more commonalities.
The characters even make a remark about the watergate scandal in the movie, providing a third parallel: Nixon had watergate, Bush had the Iraq war, Trump has Russian collusion. One step forward, two steps back as far as the presidency is concerned seems to be America’s letterhead.

Regardless of Reiner’s intentions with the movie coming out at this point in time, it does do a few things right: it shows an already bygone style of journalism. Social media and click bait have made even the most trusted source in American journalism hard to trust. Seeing reporters banging away at desk computers all day and all night, and chasing down leads will never get tiring, for me anyway; the characters are well cast and give uniformly solid performances; and the story, despite the fact that it sheds little new light on things we’ve known about the invasion of Iraq for over a decade now, is told well enough that the film never gets boring, and at a svelte ninety minutes, doesn’t bother overstaying its welcome, which these types of films often do.

That being said, the runtime, the strange timing and the general feel of the production gives the movie the air of a pilot to a new Netflix drama, rather than a movie people will want to pay money to see on the big screen.
With movie goers drowning in Marvel and Pixar and acting giants like Tom Cruise and Dwayne Johnson in 100 million dollar action feasts, there truly is no place at the multiplex for a tight journalistic drama about a war we never hear about anymore, and a president who now somehow seems not half bad in light of the president now occupying office who is well on his way to being the biggest political blunder in the history of American politics.

Shock and Awe is good, but is relatively inconsequential. It doesn’t have the teeth for the story it’s telling. It doesn’t feel as dangerous as it should. Which leaves the viewer feeling gummed, rather than bitten. And when you’re telling a story about such a serious topic, you want make sure the audience leaves with teethmarks.