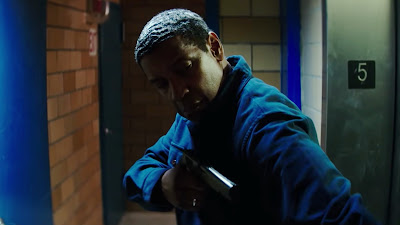 The Equalizer works best in the in between. In between the action, in between the plot points, in between the flurries of speed and precision exacted by Denzel's character in the seconds before he wipes out an entire room full of douchebags.
I like the quieter moments in this film and wish that there were more of them.

The Equalizer is based on a television series that I've never seen, although from what I hear, it's not nearly as violent or retribution filled as these films are.
But in essence, Denzel plays Robert McCall, an ex marine who takes it upon himself to even the stakes when bad guys mess with innocent people.

The first Equalizer was a lot of fun and something of a surprise hit for Denzel and director Antoine Fuqua, who has worked with Denzel on numerous films, most notably Training Day, which is still Denzel's best screen performance, as far as I'm concerned.
Whether a second Equalizer movie was necessary at all is a fair question. It doesn't add anything to the first and unless Washington makes McCall his Ethan Hunt and keeps coming back and making more of these films, an Equalizer franchise seems unlikely.
But I'm not reviewing this movie based on how much we needed it. I'm reviewing is based on how good it is.

And it is good. I really liked this movie, for the most part. The first two thirds of the film were really well done, established a nice, easy pace and allowed us to dig a little deeper into this McCall character and his deceptively simple life in inner city Boston.
The last third of the movie gets bogged down in silly plot semantics and cartoonish bad guys saying cartoonish bad guys things.
Because at its core, this is a film of narrative vignettes, with a haphazard main plot line that feels tacked on and forced. A self conscious choice on the part of the filmmakers who were probably afraid that the movie's slower pace and more character driven narrative would bore audiences who came to see Denzel kick some silly villains ass.

And Denzel does kick some ass. As in the first film, he likes to time how long it takes for him to beat the snot out of half a dozen people, leaving all of them broken, bloodied, or just dead. Time slows as he surveys his task and when he does let loose, the action is sped up and it's over as soon as it starts. It's a cool trick. One we've seen before of course, but cool nonetheless.
There are a couple of neat set pieces as well. One involving a front seat/back seat fight between Denzel and a henchman who tries to stab him while being driven by Denzel to the airport (Denzel drives an Uber type car in this movie).
The other is in the aforementioned third act, which takes place on Nantucket (I think) in the middle of a hurricane-ish storm.

Denzel's career has taken an interesting turn in the last couple of decades. Like Liam Neeson, he seems to have found a comfortable groove jumping from one mid level actioner to the next. I'm not complaining. It would be nice to see Denzel do more straight drama, but at his age, you can only do the movie's you're offered. And there are far worse things than watching a 63 year old man kick the shit out of bad people and look eminently cool while doing it.