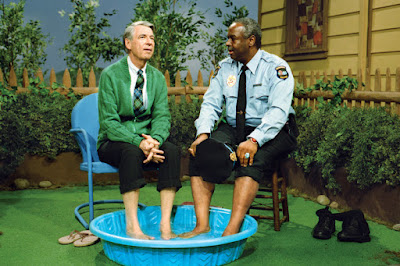 Mister Rogers is an easy guy to make fun of. His Ned Flanders-ish disposition. His mild mannerisms, his goofy sweaters, his micro budget, no frills tv show set. He has been parodied on many occasions by many people, some in good fun, some in more cruel ways. But what's striking while watching this documentary about his life and work, is how alien a figure he has become in this day and age. His show has only been off the air for seventeen years, but it feels like a by-product of another time. Some far off time in some far off place.

Mister Rogers Neighborhood never changed. The show's simple message and unhurried pace captivated children from its inception in 1968, until it went off the air in 2001.
This documentary, in highlighting the contrast between Mr. Rogers and everything else that ended up becoming children's programming, shows clips of cartoons where these shows continually evolved to keep with the times. Faster, louder, more brash, more crass, more violent. Commercials in the 90's advertising toy guns to kids so that they too can make believe killing all the bad guys that get in their way, just like their heroes on TV.
And all the while, here is Mister Rogers Neighborhood, starting every show the same way, ending every show the same way. Teaching children the importance of love, compassion and kindness.

Fred Rogers wanted to be a minister before he discovered television and decided that it was a better vehicle for expressing God's love to the masses. And yet Mr. Rogers never mentioned God on his show. He didn't preach sermons or urge kids to go to church or to convert their friends. For Fred Rogers, being a Christian meant being kind to people. Accepting everyone for who they are without trying to change anyone.
In the 60's, in the midst of segregation, while racism was at its most disgusting, there was a news story about some African Americans swimming in the same public pool as white people. In an effort to get them out, the owner took some cleaning chemicals and dumped them into the pool.
That week, Mister Rogers had Officer Clemmons, his (black) policeman friend on the show, share a pool of water with him. They both stuck their feet into a shallow kiddie pool to cool off. "But I don't have a towel", said Officer Clemmons. "Well, that's ok, you can share mine" said Mister Rogers.
This was Mister Rogers saying, on national television, "fuck segregation and fuck racism", or, in Mister Rogers words, "I like you just the way you are".

What's so alien about this behaviour in 2018 is that we are being conditioned, much like children are with their faster, louder tv shows, to move fast, suspect everyone of dishonesty and bitch about any little thing we don't like. Facebook is the worst offender of encouraging this mentality, but so is the evening news, national newspapers and other forms of so called 'journalistic reporting' which these days amount to little more than a bunch of click bait articles.
You see, right there. In order to show what a unique perspective Mister Rogers had, I had to shit on a handful of things I don't like. That's 2018. We only seem to know what we like by knowing, and vocalizing, what we don't like.

There are no Mister Rogers anymore. No one is out there, on TV or anywhere else, telling us to slow down, smile and be kind to those around you. Maybe the Dalai Lama.
And we need that, badly. Now more than ever. We need someone to look us in the eye and tell us we are loved and appreciated for no other reason than that we are who we are. With no expectations to impress or do anything extraordinary.

This documentary is a pure reflection of the Mister Rogers philosophy. I kept waiting for something terrible to happen. I kept waiting for the controversy. For charges of abuse, of adultery, of Mr. Rogers getting drunk and ranting about this or that. It doesn't happen in this movie because it didn't happen in real life. Someone in the movie that worked on the show all those years says that the big question everyone asked regarding Fred Rogers was "how similar is he in real life to the character on the show?" and the answer is "exactly the same. Exactly the same."

I cried for twenty minutes after this movie ended. No one moved a muscle in the theatre until the end credits had finished rolling and the lights came up. Everyone was trying to get ahold of themselves. I don't think we realize how negative a place this world has become until we are confronted with something, someone, that is purely and simply positive. Not perfect, but positive, even when things are going awry.

And that's when Mister Rogers Neighbourhood was at its best. When a tragedy would strike and people would tune into the show that week and hear the words 'it's ok to be sad. It's ok be frightened. It's ok to cry. Just as long as you remember that you are loved and cared about, and that you remember to care for those around you. With that in mind, we can get through anything'.