You are now online 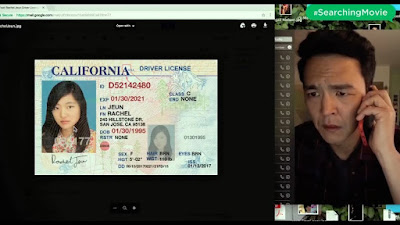 It's tempting to exaggerate what Searching could mean for the future of movies. The movie is so well made, so well paced and laid out, that while watching it you're tempted to wonder if you are witnessing the birth of a whole new genre. Or rather, the evolution of one.

Searching takes place on computer screens. Every shot, every scene, every piece of dialogue. It all plays out on screens.
To be fair, this isn't the first movie to utilize this technique. Unfriended did it in 2014, and again earlier this year in its sequel.
Unfriended is a decent horror movie, but it used its screen technique as a way to deliver jump scares in a way we haven't seen before. In that movie, the idea gets limited traction. Searching using the technique in a far more practical and possibly even revolutionary way.

Here we have a father, looking for his daughter by hacking into her social media accounts and following her digital paper trail. The movie is a puzzle and every piece is hiding in her hard drive somewhere.
Unfriended could have been done without the screen gimmick. Searching could not have. That's the big distinction. That's why Searching works so much better and why it feels like the start of something, rather than the continuation of it.

But it is an evolution. The found footage genre, also mainly utilized in horror movies, and in particular The Blair Witch Project, still the best example of how to do found footage properly, are the proper parents of Searching's screen trick.
By now found footage has more or less run its course though. Partly because it's been done to death, usually poorly, and partly because having characters stumble across discarded VHS tapes or film reels, is becoming less and less believable with every passing year.
Which makes Searching feel like the most modern movie of its time in a lot of ways. Which is also what makes seeing it in the theatre a strange experience.
A good 95% of the time, seeing a movie on a massive screen with booming surround sound is the only way to see it.
But just like seeing Blair Witch on a small square television on a scratchy VHS tape enhances the effect of the film, so seeing Searching on a computer screen, or on your smartphone feels like the best (and certainly most meta) way to experience it. It's weird looking up at a giant computer screen for 100 minutes, regardless of how involving the story is.
And the story is involving. It sucks you in in its opening moments and dares you to leave at any point to empty your bladder. I lost that dare. I drank too much water and felt like I was doing real damage to my kidneys halfway through the movie. But I could not leave the theatre even for a minute or two. I would have missed too much.

Searching is about as good a movie as it could possibly have been, but there were a couple little issues I had with it.
There is a pretty cheesy exposition dump that takes place inside a police station towards the end of the movie that was poorly written.
Also, there are so many twists and turns in this thing that it's almost impossible to figure out where the story is heading until it gets there.
That's a wonderful problem to have the first time you watch it. The unfortunate thing though is that once you know all those twists, the entertainment value of repeated viewings is going to take a hit.

What isn't going to take a hit is appreciating just how damn good John Cho, who plays the father, is. Cho has always been a good actor, but he gets overlooked because his biggest roles have been in stoner comedies and Star Trek reboots.
He is incredible in Searching though. In fact, he deserves an Oscar nod for this. I doubt he'll get one. The Academy is far too cinematically conservative and ancient minded to give any attention to a cutting edge thriller about a missing person. But he deserves one. Maybe the Golden Globes will throw him a bone.

Again, I don't want to exaggerate the potential effect Searching will have on films going forward. But it's fun to think that if Alfred Hitchcock were alive today, a man who took great joy in reinventing the language of the cinema throughout his illustrious career, Searching is the kind of film he would make. A tense thriller with a modern eye on the future. I just can't pay it any higher a compliment than that.