Just Us for Justice 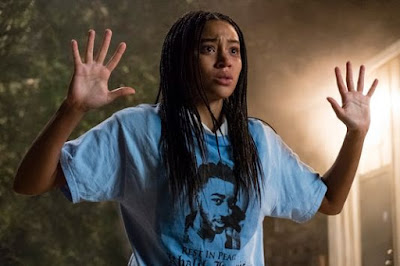 Near the end of The Hate U Give, Starr, our protagonist, says "no matter what we say, no matter how loud we shout, they refuse to hear us". That moment felt like someone dropped a boulder inside my stomach. What a perfect encapsulation of everything that is going on right now in America. With politics, with racism, with hate.
It seems that America has reached a place wherein the wheels of positive change and progressive evolution have stopped spinning. Black people are still being killed by white authority figures due to nothing more than the colour of their skin. People of certain religious faiths can no longer pray in their places of worship without worrying about a bomb going off. White nationalist groups are newly emboldened to take their racist rhetoric into the streets with bullhorns and parades. And Donald Trump, as the architect of much of this insanity, is still America's president. Is it any wonder that minorities and people of colour feel like their cries for justice fall, still, on deaf ears?

The Hate U Give explores this ugliness with a deft and caring hand. Wrapping it in a blanket of adolescent turmoil and the search for self discovery. The period where your ideas about the world are being upended, while at the same time, your body is changing and your hormones are firing chaotic bullets into your emotional psyche, daring you to react to them. We've all been there. It sucks.

Starr is a fascinating and relatable young teen who is in the midst of all of this. From a poor neighbourhood with a perpetually high crime rate, her parents spend every penny they have in order to send her and her siblings to a private school in a more affluent part of the city. This gives Starr an identity complex. On the one hand, she wants to fit in with her rich schoolmates. So she acts less 'ghetto' when she's at school. On the other, she wants to fit in at home, so she acts less uppity when she's in her own neighbourhood.
I know what this feels like. Not in terms of the poor neighbourhood/affluent school dichotomy, but in terms of wanting to fit in with two different groups and therefore playing a different version of yourself for each.
While Starr is struggling with her two sides, she witnesses her (black) friend get murdered by a white cop in a routine traffic stop 'gone bad'.
It's not a spoiler to say that the cop is not brought to any sort of justice for the killing, as is usually the case, and therefore the citizens of Starr's neighbourhood rise up in protest, while Starr has to decide whether or not she will testify against the officer before a grand jury, putting her family in danger with the local drug kingpin, who threatens Starr with harm should she open her mouth.

As much as I loved this movie, and as well made as it is (and well acted, Amandla Stenberg, as Starr, is a revelation), I have to say that the independent elements that make up the central narrative of the film are relatively unoriginal. We've seen most of these beats before, in films like Fruitvale Station, Do the Right Thing, and even the recent OJ Simpson miniseries.
But The Hate U Give, by playing it through the guise of a coming of age story (it was based on a bestselling YA novel), makes it feel fresh, current, and urgent in a way no other recent film that touches on these subjects has. We know where the story goes, because we've seen the news. We know how things will turn out for Starr and her family, and for the police officer who killed the young teen who did absolutely nothing wrong.
These struggles are nothing new. In many ways, they've been going on since Africans were first brought here on slaver boats a few hundred years ago. The black community in America still has to work twice as hard as the white community in order to get half as far. The black community still has to suffer uneasy looks and nervous glances that the white community doesn't. And if you are a black man or woman in the United States, you are still far more likely to be poor, and far more likely to be jailed or murdered by a police officer, than if you are a white man or woman in the United States.

These movies are hard for me. Watching them, I cry a lot, I sit fuming in my chair a lot, I feel sick in a lot. I want to say that I don't understand racism, but I do. I understand it perfectly. I just don't know what to do about it. I can challenge people on Facebook. I can punch someone in the mouth if they use a racial slur. I can post pictures of the cut up backs of slaves, or of the dead bodies of African Americans who have been slain by police or white mobs, or the KKK. But does that do anything? Do people care? Or do they just not want to be confronted with the awful reality that racism didn't end with the emancipation proclamation, it just looks different now.
I want to do something, but Starr's words keep ringing in my head, and make me wonder if there is any point. "No matter what we say, no matter how loud we shout, they refuse to hear us." When will they stop refusing? Will they ever?