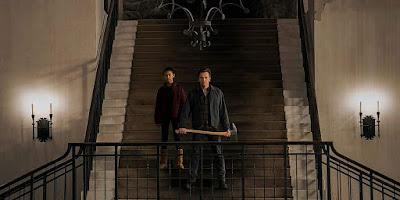 There are a few movies that I watch once a year, every year, usually tied into a holiday. On St. Patrick’s Day, my family watches Waking Ned Devine. On Remembrance Day weekend, I watch either Saving Private Ryan, or Schindler’s List. At Christmas time, I watch It’s A Wonderful Life. And on Halloween, every year for many years now, I watch The Shining.
The Shining is Stanley Kubrick’s famous (and infamous) adaptation of Stephen King’s bestselling book about a haunted hotel in the Colorado Rockies. It’s famous because, as with all of Kubrick’s films, it is a masterclass in filmmaking. And as a horror film, it is terrifying. It’s infamous because Kubrick was a perfectionist of the highest order and he was famous for his long shooting schedules, his films going way over budget, his tendency to film a hundred takes of every scene, and, in The Shining's case, his poor (some have said abusive) treatment of Shelly Duvall throughout filming in order to coax the right performance out of her. Duvall has said in interviews that it took her years to recover from her experiences and mistreatment filming The Shining.
The other infamous aspect of the film is that Kubrick took great liberties with the book’s narrative, which King hated. King would badmouth the film every chance he got, to whomever would listen. It got so bad that at one point, Kubrick had to personally call King and ask him to stop slamming the movie so much, it was costing him money.
What’s interesting about that story in regards to Doctor Sleep, is that the novel, also written by King, and this adaptation of the novel, contain wink and nods to many elements that can only be found in the Kubrick film. Proving that the film did in fact have an influence on King.

In Doctor Sleep, Danny Torrence (he now goes by Dan), is a trainwreck. An alcoholic (like his father), he has trouble functioning like a normal human being, due to his substance abuse and the emotional scars left by his experiences as a child at the Overlook Hotel.
Dan leaves the big city and heads for a small town ‘to escape himself’ and crosses paths with a young girl who ‘shines’ like him. Together they have to find a way to stop a band of gypsy soul eaters, who kidnap and murder children and feed on their souls in order to remain young forever.

The first thing I’ll say about this movie is that it is just as dark and unsettling as it sounds. The film was made by Mike Flanagan (more on him in a minute), who does not, in his films and tv shows, shy away from stuff that most other horror directors would consider ‘too far’. He’s not afraid to test the audience’s tolerance for cruelty. And indeed, after one such gratuitous scene involving a young boy who is kidnapped by the soul eaters, there were several walkouts at the screening I attended. And I don’t blame them, that scene goes too far.
Flanagan is, without question, the most lauded director of horror working today. All of his films have high critical ratings on Rotten Tomatoes and his Netflix series from last year, The Haunting of Hill House, is widely regarded as the most disturbing and terrifying horror tv show of all time. He’s an amazing director and visualist and Doctor Sleep is filled with awesome feats of special effects flexes and emotional yo-yoing that leaves you feeling high one minute, and sick the next.

I didn’t read Doctor Sleep, or know anything about it before going into the theatre. This being the sequel to one of my five favourite movies of all time, I didn’t even want to see a trailer if I could help it, because whatever they cooked up for this movie, its very existence is kind of an insult to Kubrick Shining obsessives like myself.
But I could not imagine this film being any better than it was. Than it had any right to be. There are things about it I didn’t like, but it impresses far more than it disappoints. My favourite part of the movie is something I can’t go into without spoiling things I wouldn’t want to spoil for you, but what I can say is that in the third act of the film, there is a sequence of such perfect fan service to Kubrick’s film, you will get lost inside the movie in the best possible way. Unless you’re not a horror fan, or a Shining fan, in which case, you will get lost in the movie in the worst possible way. Either way, it’s an experience.