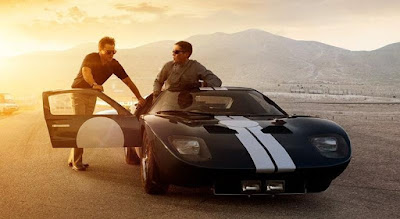 I'll get two things out of the way right off the bat. I don't care about cars and I don't care about racing. That means I knew nothing of this real life battle between Ford and Ferrari at Le Mans in France in 1966, I knew nothing of Carroll Shelby and I knew nothing of Ken Miles. It was up to this movie to circumvent the fact that as far as I was concerned, nothing about the narrative of this film held any interest to me going in.
But that's why you hire Matt Damon and Christian Bale as your leads. Because for all of us 'couldn't car-less' people, you need a reason to get asses in the seats.

In Ford v Ferrari, Shelby and Miles are hired by Ford to compete against Ferrari in the Le Mans race in France. Le Mans is a 24 hour endurance race that for years was dominated by Ferrari. Until one day, Ford decided to build their own $3 million dollar race car and compete against Ferrari for the crown.
And that's about it. Along the way, Shelby and Miles butt heads with suits, family and each other, in order to add dramatic weight to the journey to Le Mans, but otherwise it's mostly about the races. Which is good, because those are the best parts of the movie.
The racing scenes in this film are truly exhilarating. You really feel the speed of the machines and the danger that exists around every tiny decision these drivers make. I didn't see the film in IMAX, but I'm seriously considering going back and seeing it in that format for the race scenes alone.

Damon and Bale and the supporting cast are all on point. Bale is magnetic as usual. Damon is great is his everyman way. But the real star of the show here is director James Mangold. Mangold has been making movies for many years now and most of them have been fantastic (Girl, Interrupted, Cop Land, Walk The Line, 3:10 To Yuma, Logan). Ford v Ferrari is where he really earns his wings though. This is top shelf, old Hollywood, shiny as a brass bell moviemaking that few directors are capable of pulling off. If Steven Spielberg's name was on this movie's poster instead of Mangold's, you wouldn't bat an eye. I don't know how much CGI was used in this movie, vs. organic effects, but it all looked real to me and that's the important thing.

This movie is a success and I'll tell you why. It's not because it currently holds a 92% rating on Rotten Tomatoes. It's not because it's well made. And it's not because of the big stars and the big budget. It's because it's two and a half hours long and it doesn't feel like it's two and a half hours long. It's because you don't have to care about cars or racing to care about what's happening on screen. It's because, even after seeing the movie, and liking it, I still don't care about cars or racing, but I'm glad I got to see it and I may go see it again.
That's what they mean by movie magic. Making something you care about, about a subject you care nothing about. That's not easy, in any art form. But it's always magic when they pull it off. Ford v Ferrari pulls it off. Go see it.