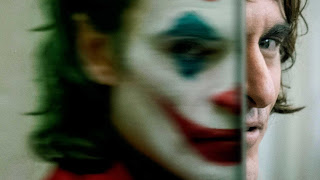 This is a movie that could be a lot of things to a lot of people. Actually, if ten different people, with ten different backgrounds went into this movie, they could have ten different experiences watching it and come out with ten different interpretations of what it all means.
As far as I’m concerned, this is a movie about abuse and neglect and what that does to a person’s brain. You don’t need to be a paediatrician or a child psychologist to know that a rough childhood often means a rough adulthood.
On the surface, yes, this is a movie about the Joker, Batman’s arch nemesis, and how he came to be the chaotic, clown face wearing sociopath so gleefully portrayed by everyone from Cesar Romero to Zach Galifianakis. But in actuality, the character of the Joker as the propulsive narrative focus of this film is itself a mask. In actuality, this movie is about how people’s minds are equipped to take only so much mistreatment before they snap and collapse in on themselves.

The beat points of this Joker’s journey from awkward loner to maniacal criminal are as follows:
Arthur Fleck is a clown. That’s his actual job. He dresses up as a clown for hire for an agency that people call when they need a clown (sales sign spinners for businesses, children’s hospitals, etc.). He gets beaten up a couple times, gets a gun for protection, gets caught with the gun at work and gets fired. More bad things happen, including revelations about his past and his capacity to endure loneliness is stretched to its very limit. Then, somewhere along the line…he breaks.

Joaquin Phoenix plays Fleck/Joker and he’s the only actor I’ll mention in regards to this movie, because he’s the only actor worth mentioning. He’s in literally every scene of this film and that’s a good thing for two important reasons: 1. He’s absolutely magnetic and brilliant and beautiful and scary and heartbreaking and fun and sad and weird. This is truly a performance unlike any other. This is a lock for an Oscar and one of those performances you will never not think about when you think about great, transformative performances in the movies. And 2. Spending every moment of this film with Phoenix forces an intimacy of immediacy with him and with the film, whereby by the end, when Joker is being very Joker-like and violent, you feel sort of icky for still feeling bad for him and cheering him on.

Despite all of the high praise I’m giving this film, I had to see it twice just to know how I felt about it. Not because of the violence, or the cynicism, or the realistic and sun killing depiction of mental illness, but because of deja vu.
For all of its bravura in Phoenix’s performance and its brave and important commentary on abuse, in many ways (perhaps too many ways) this movie is a remake of two early Scorsese classics. In Joker, New York City is a stand-in for Gotham City. In Taxi Driver, NYC plays itself. And it is a character in both. Taxi Driver takes place mainly at night, but it’s no less imposing or dreary than Gotham is in broad daylight in Joker. In Taxi Driver, Robert DeNiro plays Travis Bickle. A man who is desperately lonely, awkward and sad. Exactly like Arthur Fleck. In The King of Comedy, DeNiro plays Rupert Pupkin, a desperately lonely, awkward and sad man, who wants to be a stand up comedian and is obsessed with Jerry Lewis’s talk show host. In Joker, Fleck wants to be a stand up comedian and is obsessed with talk show host Murray Franklin. Franklin is played by…wait for it…Robert DeNiro. Need I go on? There are more similarities, but they would spoil important plot points.

The first time I saw Joker, these blatant and unrepentant acts of plagiarism bothered me quite a bit. They distracted me from the more important and pressing elements of the film. But the second time, making peace with their presence going in, I was able to ignore it and just focus on the movie itself. Which meant that the second time I saw Joker was the better experience.

There is a moment in this film that is strange in that, you know as soon as you see it, that you are watching a piece of movie history play out before your very eyes. One of those scenes that will go down in the annals of the history of cinema as a transformative moment and a moment that will live on endlessly in still and posters, film classes and, in this day and age, memes and Snap Chat replications. We don’t usually know we’re watching these moments the first time around. It only becomes clear after a certain number of years have passed and we say, with hindsight being 20/20, ‘of course that was a classic scene. Obviously.’
I of course am referring to the staircase dance sequence, wherein Joker, having found a new, darker purpose in life, expresses his glee by kicking heel to toe down an imposing set of stairs, making puddles jump around the cuffs of his red pantsuit like a carefree toddler after a rainstorm. It’s an image you won’t soon forget. Arthur Fleck, rising up from the darkness to become something darker, but more free. A cynical celebration perhaps, but it’s a cynical world out there for many. A world in which, in some ways, as Arthur says, ‘it’s getting crazier out there’.