Back to the future past 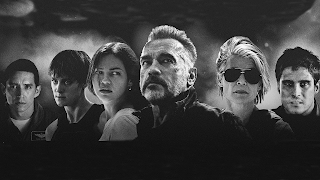 Did you like Terminator 1 and 2, but not all the rest of them? Then this sequel is for you. According to the filmmakers, this is a direct sequel to Terminator 2. And while it takes place several decades ahead of the events of that movie, it happily rolls along as if the other Terminator films that have come out in the interim…didn’t. I’m good with that. Those movies were relatively forgettable and I had trouble keeping track of how they all fit together anyway.

In this chapter, a Rev-9 Terminator (a much newer, more technologically advanced Terminator than Arnold Schwarzenegger’s tired old version from the first two films) is sent back to terminate Dani Ramos. She’s a resistance fighter who leads an uprising against the machines in the future. At the same time, Ramos sends back Grace, a human/machine hybrid, to protect her younger self from the Terminator she knows will be sent back to kill her. This is basically the exact same plotline as both Terminator and Terminator 2.
Spicing the plot up this time around though, is the help Dani and Grace receive from Sarah Conner, again played by Linda Hamilton, the woman who Schwarzenegger’s Terminator in the first film tries to kill, and who’s son Schwarzenegger’s Terminator tries to protect in the second film.

With the plot details out of the way, let’s talk about the execution (no pun intended). The good news is, if you’re an action fan that likes your action technology based, or a sci-fi fan that likes your sci-fi with plenty of shooting and explosions, this movie has you covered. The action set pieces begin at the very start of the movie and from there, there aren’t many breaks for exposition or relationship building between the characters. The biggest pause actually occurs when the group running from the Rev-9, find their way into the woods, to the home of Schwarzenegger’s Terminator. This is the part of the film that makes the least amount of sense and I feel was written in there just to give the filmmakers a reason to bring Arnold back and strap him, perhaps one last time, into the robotic exoskeletal frame of the Cyberdyne Systems Model 101 (also known as the T-800).
Here’s what I don’t get: somehow, the Terminator has aged. I get that the skin that covers the robotic skeleton is living tissue, but I still don’t get how he ages at the same rate as other humans. He’s also grown (or learned) a conscious. After all the terminating he did back in the day, he now lives a quiet life with a wife and a son (not his biological son) and spends his days helping with the groceries and drinking Corona’s. That’s also weird, as he was programmed to kill, not to change diapers. Terminators terminate. That’s all they know how to do. But whatever. The scenes with the T-800 are cool for two reasons. He gets his ass kicked by the other Terminator a whole bunch, which is always fun. And Arnold’s performance is top notch. Schwarzenegger has done some cool stuff, but the role he was born to play was the T-800. Truly, he is best when he plays characters that have a limited range of emotion.
The other performances are cool too, although I will say that Linda Hamilton, so good as Conner in the earlier movies, seems like she’s pushing just a little too hard here. Like she would have been good at 70% pissed off Terminator killer, and instead she plays it at 90%. That, and the relatively silly dialogue, holds the film back from being able to be taken as seriously as Cameron’s films.

I will say that the aspect of this movie I liked the most has nothing to do with Terminator’s, action set pieces, special effects, or plot. The thing I liked the most about this movie is that it celebrates diversity in the best way. The older Terminator movies were very, very white. Dark Fate takes place in Mexico City and other places close to the Mexican/American border. And it features many diverse roles for lesser known Mexican American and Columbian actors and actresses with which to shine: Gabriel Luna, who plays the Rev-9 Terminator, Natalia Reyes, who plays Dani, Diego Boneta, who plays Dani’s brother, as well as a whole host of supporting cast players and extras. There are just very few white roles in this movie. I love that. Not to mention, there are three badass women in three of the main roles. I love that too. I hope we see more of it.

Despite all of that though, I did not like this movie as much as Terminator 1 and 2. And I honestly can’t remember if I liked the other interim Terminators at all. But it was fun, it was silly, it was loud and bombastic and expensive looking and not at all a bad way to spend a Sunday afternoon (or any afternoon that finds you with two free hours to burn). This movie is a pop song, not a symphony. It will have you tapping your feet, get stuck in your head for a couple of days, and then fade from your memory like a T-800 experiencing a system failure. And there's nothing at all wrong with any of that.