The tale as old as time we know as Beauty and the Beast started its life in France in 1740 as a 100 page novella. It was pared down and rewritten many times over the ensuing centuries until, 206 years after its first written appearance, it was adapted for the screen by French filmmaker Jean Cocteau.

La Belle et la Bete is a surrealistic fever dream that is far more gothic horror than the feel good pop fantasy of the later films. In this version, Belle is a simple farm girl with two evil sisters, a well meaning but idiotic brother, a doting father, and a family friend who is blond, handsome and intent on marrying her. On the way home from a business 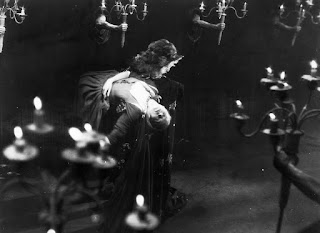 deal, Belle's father gets lost in the woods on a foggy night and happens upon an imposing castle. He goes inside and screws around for a bit and then heads back out and plucks a rose from a trellis to give to Belle. When he does, the Beast appears and informs the man that he is a thief and is now his eternal prisoner, but that one of his daughters can swap out and take his place.
In this version of the story, there is no Gaston. In fact, the blond adonis that wants to marry Belle isn't such a bad guy and although he does hatch a plan to go and kill the Beast, it's only because he's worried about Belle.
Disciples of foreign cinema love this version of the story and routinely label it a surrealistic masterpiece, with Freudian overtones and subtextual commentary about the recent occupation of France by Nazi forces.
I don't see that. I actually don't like this version very much at all. I think the story is silly, the dialogue is ludicrous and the acting is so far over the top, it often feels like the film is parodying itself before anyone else has the chance to.
Also, while the set decorations are impressive and the effects for 1946 were likely very impressive, the enchantment of the castle consists of little more than arms sticking out of holes in the wall holding on to candelabras and statues with human eyes that follow people as they move about. So, no cute talking teacups then.

Several decades later, Disney stepped in and Disney did what Disney does. It turned a haunting and disturbing parable about loneliness and despair into a pop cultural phenomenon, with memorable songs, laughs aimed at both kids and their parents and a feel great ending that with Disney is always a guarantee. 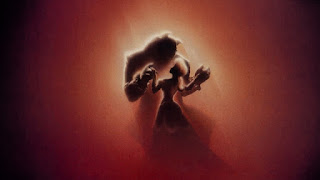 The 1991 film has shades of the '46 feature, but it reclaims and reinvents the story so thoroughly that if you were to watch the two back to back, as I did, oftentimes the onlythread that holds to two films together is the Beast himself. Of course, in Cocteau's film, the Beast looks like a man wearing a costumed lion head. Whereas in the Disney version, being animated and therefore unencumbered with the practical and budgetary restraints of special effects, the Beast is a full bodied monster.
Disney also refined the fairytale in their version, creating one of the best opening scenes in film history with that stained glass backstory about the enchantress and the rose and the selfish Prince needing to find love as the cursed Beast. Perfect.

Twenty six years later, Disney decided to make a live action version of this near perfect 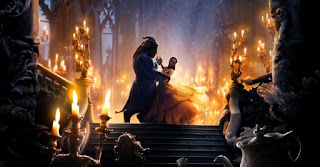 animated classic. Why? If you ask me, they're running out of ideas. Disney's partnership with Pixar and acquisition of Marvel and LucasFilm has ensured they remain relevant and plenty successful as they churn out Star Wars features and superhero sequels. But without these franchises buttressing their bottom line, they don't have as much to crow about. We'll likely never again see Disney run off a line of animated masterpieces the way they did from 1937 with Snow White, through 1994 with The Lion King (Toy Story came out a year later and shook the whole industry up).
Which isn't to say they've complete lost their touch. Occasionally they'll hit pay dirt with their own Pixar copycat, like a Frozen, a Big Hero 6, or a Moana. But it's just not like it used to be at the ol' Walt Disney Animation Studios. Which is why they've started adapting all the masterpieces from their golden era into live action offerings ('live action' being a relative term, as these movies are mostly computer generated anyways).
This seems to have had a hit or miss effect on audiences, with Beauty and the Beast doing quite well at 71% for critics and 80% for audiences on Rotten Tomatoes.
I was one of those 80%'s as I loved the movie. Emma Watson as Belle was a perfect piece of casting, as was Josh Gad as Le Fou. I liked that they made this a little darker and a little more dangerous than the '91 version. They leaned into the gothic overtones of the '46 film and as such the Beast's castle feels cold and haunted and unsettling in a way the animated version had no interest in feeling.
It's not without its flaws though. This film is two hours and ten minutes long, a pretty indulgent runtime for a family film. Especially considering the other two version were a crisp and considerate eighty some-odd minutes each.
One reason for that big runtime were all the new songs. As well as porting over the songs from the animated version, Disney felt the need to shoehorn in another half a dozen new Menkin songs that not only weren't needed, but served to make the film drag when it should have been breaking into a sprint.
Also, the candlestick, clock and other enchanted pieces of furniture that occupy the castle look far more creepy than the cuddly hand drawn versions in the 90's version.

To me, there is still only one essential version of Beauty and the Beast, and that is the version that I grew up with. The animated, feel good, ninety minute piece of pop culture that will forever hold a piece of nostalgia real estate inside of my head. I've only seen the other versions a couple of times, but they never had a chance. Not when I fire up the '91 version and hear David Ogden Stiers ask me, in a way that gives me goosebumps every time I hear it, even today, "who could ever learn to love a beast?" 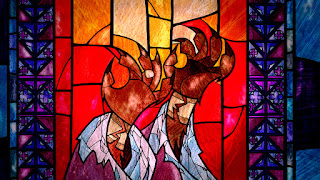