"They call us 'others'...they're the others. He should not be president. It's as simple as that" 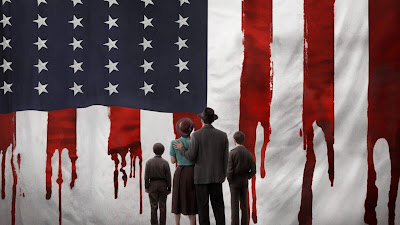 The Plot Against America is a 'what-if' miniseries, that ponders what things would have been like if Charles Lindbergh became president and America never intervened in WWII.
But what it's really about is Trump. What America looked like after he won an improbable victory, and ponders what America will look like if he is reelected.

The series focuses on the plight of the Levin family. Working class Jewish Americans, Roosevelt supporters and critics of Lindbergh's anti-semitic campaign to become POTUS.
Lindbergh, in the show and in real life, is a war hero, a celebrity and a business tycoon. He has no political qualifications to hold the highest office in the land, so no one takes his blowhard campaigning, one built on stoking the fires of hate for the so called non-American 'others' seriously (sound familiar yet?) But the Levin's vastly underestimate just how bigoted and racist their country is, and Lindbergh wins by a landslide. As a result, America slowly deteriorates into another version of Nazi Germany, with Lindbergh supporters terrorizing Jewish families all over the country, having become emboldened by their new leader to no longer feel the need to hide their hatred in the shadows. Racism is now in broad daylight (still sounding familiar?)

The show is based on a Philip Roth book that came out in 2004, well before the Trump circus and while some thought it was an allegory for the Bush administration, Roth denied it had anything to do with George Dubya. As it turns out, Roth was prophesying a far more insidious administration awaiting us in the next decade.
It was adapted for television by David Simon and Ed Burns. The men behind other novelistic television shows and miniseries, including Generation Kill, Show Me A Hero, The Deuce and, most famously, The Wire, which is perhaps the greatest television drama ever made.
Ok. So yes, this is a show about a fictional Jewish family, in fictional WWII era America (a war America takes no part in, resulting in Nazi victories over France and England), about a non fictional man winning a presidency that in reality went to Roosevelt. But there's no  denying what Simons and Burns are trying to tell us by giving us this show at this moment. Essentially: beware the power of hate. Simons has made no secret of his dislike for Trump and he pulls no punches when drawing through lines between the political climate in the show and the political climate in America today. But he's not exaggerating. The disturbing realities the Levin family are faced with in the show are the disturbing realities of so many non-white citizens in America today. Citizen that live with the fear of deportation, discrimination or bias because their president is telling everyone that they are the 'others'.

In the show Herman Levin stubbornly and defiantly stands up against the Lindbergh administration. He refuses to allow this anti-semite to run him out of the country and head for Canada, where many of his friends and family are going to find a more accepting refuge. One of his friends moves his family to Winnipeg, which is almost certainly the first time Winnipeg has ever been mentioned in an HBO show.
Levin's resolve slowly diminishes as the series rolls along and the attacks against the Jews, not only in New Jersey, where they live, but in many parts of the country, intensify. By the time Levin defeatedly admits they should have gone to Canada when they had the chance, the borders have been closed and they are stuck in the anti-Jewish hell of Lindbergh's creation.

The miniseries is the best format for visual storytelling. Better than a two hour movie, which can often feel rushed. Better than a multi-season television show, which are usually too long, leading to several episodes a season where the writers have brain farts or writing blocks. In a miniseries, a format which Simons has perfected, you're in and out in six or so hours. Each episodic chapter is an easily digestible hour. Long enough to flesh out character archs and narrative depth, but not so long as to overstay its welcome. Last year's Chernobyl miniseries was the ultimate example of this.
The Plot Against America works perfectly as a miniseries. This is not a story that needs to go on and on over multiple seasons. And it's too much story for a single movie. It also encompasses several years of the Levin family's life, which is hard to convey in film.

It would feel hyperbolic, after all I've said about the show, to now say that it's perhaps the most important series to watch at this point in time, with an American election just over the next horizon. But if you want something to wile away six hours of your life that allows you to reflect on the sorry state of political affairs in America, while also showcasing upper tier writing, directing, acting and set design, then The Plot Against America is the show for you.