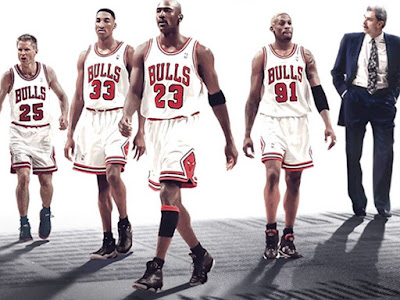 The footage that exists of Michael Jordan and the Chicago Bulls, taken with full access during what would become their sixth championship season, had become a fable that hoop heads would ponder and whisper to each other about. It was as if someone had come forward and said that they had footage of Jesus during the final days of his life, but that they couldn't show it to anyone without Jesus's permission and that Jesus was being very stingy with his permission these past few thousand years.
And while Air Jesus had only been stingy with his permission since 1998, it felt like a thousand years for all of us faithful disciples.
According to director Jason Hehir, the greenlight came at the conclusion of the 2016 NBA Finals. That history making run wherein Lebron James and the Cleveland Cavaliers came back from a 3-1 deficit against the dynasty Golden State Warriors, a feat that had never been accomplished by any team before or since. Immediately following this historical accomplishment, the sports world was alight with 'is Lebron James the greatest of all time?' MJ didn't like that. He told Hehir that it was time.
Two year later we got a trailer during the 2018 NBA playoffs announcing The Last Dance, coming out in the summer of 2020. That was cruel. To announce something Jordan fanatics have been salivating over for two decades and then telling them to keep on waiting another two years. 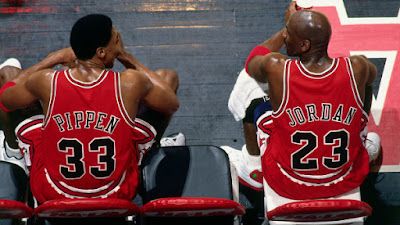 But, it's finally here. And after five weeks of gathering around the television every Monday for two hours (Sunday night in the States, via ESPN), we can all sit back and revel in the majesty and chaos that was the 1990's Chicago Bulls, the last great NBA dynasty (the Warriors never three-peated, don't @ me).
ESPN has said that The Last Dance was their most watched sports documentary ever. In Canada, The Last Dance is still sitting at #1 in their 'top 10 in Canada' section and if you Twitter or Instagram, you will have no doubt come across a cornucopia of fresh Jordan memes every week (Jordan is the most meme-able celebrity of all time, I'm sure). So whether it lived up to the hype or not, people kept coming back every week and inhaling these episodes. It confirms one thing about The Last Dance that will endure far beyond this collective pause we are living through. This will be forever known as the show that helped us through the Coronavirus. With most television and movie production companies starved for content and robbed of the ability to create anything new for the time being, the filmmakers behind The Last Dance did us all a solid by pushing the show up several months, so that whether you were on total lockdown, or just partially restricted from your normal order of things, you had something new and exciting to look forward to every week. In fact, they pushed the show so far ahead, that while we were all watching the current episodes aired every week, the filmmakers were still sending files back and forth, editing the next week's episodes, in some cases right up until 48 hours before they aired. Talk about a deadline! It brought the world back to a time before streaming. When miniseries like Roots, or Band of Brothers were events the whole world sat down and watched together. Event programming that people cleared their schedules for. And just as you didn't have to be black to enjoy Roots, or a veteran to enjoy Band of Brothers, you don't have to know anything about, or even like basketball, to enjoy The Last Dance. Great entertainment transcends genre or subject matter. People will watch anything about anything if it's good enough. And The Last Dance was good enough. It was more than good enough. It was incredible. 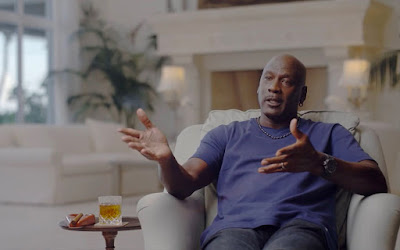 If you ask me (and you should), there are not many people on this earth that are bigger Michael Jordan fans than I. I have a whole wall in my basement decorated with framed Jordan posters and jerseys. I have a whole closet full of his overpriced shoes. I have read almost all of the books that have ever been written about him and watched as many of his games on YouTube as I can fit into my life while also holding down a job and raising a family. So if this series was made for anyone, it was made for me. Truth be told, there weren't many stories that were told in The Last Dance that I didn't already know. At least three different books have been written about Jordan's final season with the Bulls. There have been podcasts about it, endless interviews conducted and crappy documentaries made. There isn't much you can tell me that I haven't heard before. But the hook is the footage. Jordan is notoriously reclusive and private. And who can blame him? The man has been one of the most famous human beings on planet earth since he was 21 years old. There is no place on the globe he can go and not get mobbed. That will do things to your brain. He's barely given an interview since he retired from basketball. So to have this somewhat intimate, behind the scenes footage of the Bulls at a time when they were about to become one of the greatest professional sports teams in history is catnip.
Jordan teasing his teammates, bullying his general manager or torturing people on the team in an effort to inspire them to rise to his level of competition is incredible stuff. What's also incredible is that Jordan himself recently said that he thinks this documentary will cause people to dislike him. Jordan's relentless drive to be the best and berate others who don't have that same drive isn't news to devotees like myself, but it was jarring to my wife, who knew little of Jordan the man (other than some of the stories I shared with her over the years). She came away from a few of those episodes not knowing whether she admired Jordan's drive or felt disturbed by it.
Perhaps more fascinating than even the behind the scenes footage though, are the interviews with Jordan in the present day. Jordan sat down for hours of interviews with the filmmakers and nothing (apart from his home life, which was more or less left out of the documentary altogether) was off the table. We maybe don't believe Jordan's explanations for everything (the poisoned pizza? Come on man, you were hungover), but the fact that he was willing to talk about so much that people had up until now only been able to speculate on was something I never thought I would witness. And one of the things that Jordan spoke about at length was his competitive drive. Something that he seems to have little control over. So much so that at one point in one of the later episodes, while speaking about his need to be the best and have others match that hunger, he breaks down in tears and tell the filmmakers to stop the interview. As if Jordan's story wasn't enough of a Greek fable already, here we have a man who is so consumed by an obsession for competition that he had become the best there ever was at something, and in many ways it tortured and imprisoned him. You can't make this stuff up. While my wife wasn't sure at times whether she loved or hated Jordan, more often than not I just felt bad for the guy. 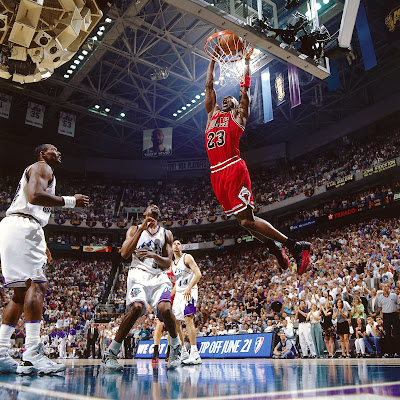 Hehir has said that he had more than 100 hours of behind the scenes footage from that last season with the Bulls. That this documentary was only ten hours long, and every episode featured a healthy dose of interviews, highlight career footage of Jordan and the Bulls and retrospective on his basketball career dating back to 1982, you have to wonder what gems exist on the other 95 or so hours of that footage. And while I highly doubt, save perhaps for a director's cut in the future, that we'll ever see any of it, it did leave me feeling at the end of episode 10 like I wish there were more of that fabled footage in the series and less of the other stuff. But only a little. Because everything we did get was gold. Interviews with the Bulls, their coach Phil Jackson, owner Jerry Reisendorf (general manager Jerry Krause died some years ago). As well as a host of celebrities. Everyone from Barack Obama, to Justin Timberlake to an equally reclusive John Stockton (Karl Malone didn't want to participate). Ultimately, it might feel a little thin for Jordan fanatics who already know all this stuff and have seen all the highlight reel clips dozens of times. Then again, it is precisely those people who would be eating up every little bit of previously unseen footage they can get their eyes on.
And for everyone else, people who had never heard these stories or knew much about Jordan beyond knowing he played basketball and was really, really good at it (Jordan is sometimes referred to in this country as 'the Gretzky of basketball'. That phrase is only spoken here in Canada and nowhere else in the world, I can guarantee you), then I would imagine this entire ten episode run had to be one hell of a ride.

Which doesn't mean that The Last Dance received critical acclaim across the board. Several of Jordan's teammates have come out and criticized the way they were portrayed in the series (Pippen recently said that if he knew how he was going to be portrayed, he wouldn't have participated). Basketball insiders have pointed out that Jordan had final say on what went in and was left out of the documentary. And considering how protective and controlling Jordan is of his image, past and current (he has a multibillion dollar clothing company named after him and with a logo of his likeness on it to consider, after all), it's assumed that what we saw over those ten hours was very likely the watered down version of the Bulls's sixth championship in eight years. No matter what Jordan says about people not liking him.
But, honestly, who cares? The Last Dance was a wonderful distraction for five weeks and it was neat to see how many people got excited about it, sports fans or no. It sucks that's it's over, but I like the way they did it. Two episodes a week felt just about perfect. One a week would have been too little, getting it all at once would have been too much. I would have devoured it too quickly. Like when your first meal comes at four o'clock and is something you've been looking forward to all day. It's better to eat slowly, savouring the flavours and contemplating the texture between bites. Plus, now that I've seen it, I can do what I've been looking forward to doing since Episode 2. Starting it all over again and inhaling it the way I just said was not a good idea. But that was for the first meal of the day. With meal #2, all bets are off.